BENGKAYANG - Several traders at Sungai Duri Market, Sungai Raya District, Bengkayang Regency, West Kalimantan, wept for President Joko Widodo's arrival to the place today.
"This is the first time the President has stopped at our village Pasar Sungai Duri. This has never happened before", said Apung, a basic food trader quoted from Antara, Tuesday, August 9.
The 52-year-old woman cried happily when Joko Widodo passed in front of her shop while being surrounded by residents.
"Thank you, Mr. President. You are great. I cried because I was touched that the number one person in the Republic wanted to enter our village", she said while wiping away tears.
Salimah (58), a vegetable trader, shook hands with President Jokowi.
"Fortunately, the President greeted me today", she said.
According to her, even though she was squeezed in the crowd, she could also be in the front position after being pulled over by a fellow trader.
"Salimah, her body is small, she was squeezed by the crowd, that's why I pulled her. Thank God he was able to shake hands with the President", said Biyah, a trader who is next to Salimah.

President Jokowi's presence at the Sungai Duri Market in addition to meeting directly with the community also distributed assistance to traders in the form of cooking oil and necessities.
Before the Sungai Duri Market, President Jokowi accompanied by several ministers from the United Indonesia Cabinet, the Governor and Deputy Governor of West Kalimantan, the Regent of Mempawah and others inaugurated the Kijing Port of Pontianak Port. 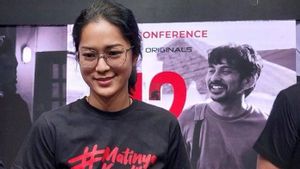