JAKARTA - Ruhut Sitompul recently uploaded an edited image or meme of the Governor of DKI Jakarta Anies Baswedan wearing a koteka as well as traditional Papuan Dani clothing. Ruhut was then reported to the police on suspicion of racism.

The PDI-P (PDIP) politician has now re-uploaded the Anies meme. Anies is shown with a bald head with a sullen face.

In Ruhut's upload, there are two other photos, namely President Jokowi and the Governor of Central Java Ganjar Pranowo. However, only Anies's photo was allegedly edited.

"This is the face of the next President of the Republic of Indonesia, the future one," Ruhut wrote in a statement posted on his Twitter account @ruhutsitompul, quoted on Tuesday, July 5.

Ruhut's upload also provides a narration in each of his photos, where Jokowi is written as "The Present", Ganjar "The Future" and Anies "Masa Stupid".

Ruhut described the three photos in his upload as having one supporter appreciating Jokowi's visit to Ukraine and Russia in carrying out the peace mission, while the other one ridiculed the actions of the head of state.

"Supporters who really respect Mr. Joko Widodo's hard work to reconcile Ukraine and Russia and whose stupid supporters know that they only insult what Mr. Jokowi is doing, everything is wrong. Freedom," said Ruhut.

Meanwhile, Ruhut was involved in a meme problem after uploading the Anies meme in traditional Papuan clothing.

In the meme that Ruhut uploaded on Thursday, May 12, Anies uses a tassel on his head. Meanwhile, on his nose, accessories are attached to the teeth of pigs.

In that meme, Anies did not wear a top. While his subordinates only use a koteka.

His action was not long after Ruhut posted a photo with the narration 'Haram Supports Anies Baswedan'.

For his act of uploading Anies' meme wearing a koteka, many netizens criticized Ruhut and criticized a number of parties. The Head of Public Relations of the Polda Metro Jaya Kombes Endra Zulpan confirmed that his party had received a report against Ruhut.

Soon, Ruhut apologized to the public, especially those who felt offended by his upload on social media.

"But I have to be wise and for all those who are still angry, forgive me, humans who are not free from mistakes. Freedom," said Ruhut on the Twitter account @ruhutsitompul, Friday, May 13. 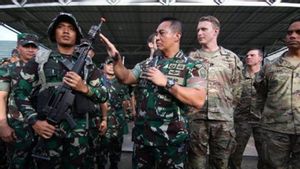