President Jokowi will resume discussions on economic and investment cooperation between Indonesia and the PEA.

President Joko Widodo (Jokowi) conveyed to Russian President Vladimir Putin that Indonesia does not have any interests, unless the conflict in Ukraine ends, the effects that occur as a result can be recovered, at a meeting in the Kremlin, Thursday.

Russia's invasion of Ukraine, which has lasted more than four months, has had a global impact on food, fertilizer and energy, felt by billions of people around the world.

"Indonesia has no interest, unless Indonesia wants the war to end soon and the food, fertilizer and energy supply chains need to be restored immediately, because they have an impact on the lives of hundreds of millions and even billions of people," said President Jokowi in a joint press statement with President Putin, launching the Kremlin.ru July 1st.

"I call on all world leaders to revive the spirit of multilateralism, the spirit of peace and cooperation. Only with this spirit can peace be achieved," continued President Jokowi.

President Jokowi said hundreds of millions of people were affected by the disruption of the food supply chain, especially in developing countries.

The President appreciated President Putin saying, Russia guarantees the security of food and fertilizer supplies not only from Russia, but also from Ukraine.

"For the sake of humanity, I support the United Nations' efforts to reintegrate Russian food and fertilizer products and Ukrainian food products into global supply chains. In particular regarding seaborne shipments from Ukraine, President Putin said he would guarantee it," said President Jokowi. 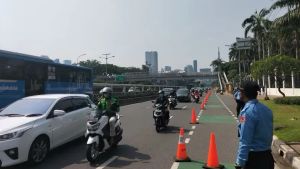 After Inspector General Ferdy Sambo Became A Suspect, His House Was Not Attached To A Police Line But Was Guarded By Three People