JAKARTA - Minister of Health (Menkes) Budi Gunadi Sadikin said the rate of transmission of COVID-19 in Indonesia has now reached more than 2,000 cases per day.

Thus, the rate of cases in the country is at level 1 according to the World Health Organization aka WHO.

"Indeed, there is an increase from 200 to 2,000 cases at this time. But the peak of the wave in Indonesia previously reached 60,000 cases per day," said Minister of Health Budi after receiving assistance for a vaccine refrigerator machine from the Japanese Government at JICT Tanjung Priok, North Jakarta, Sunday. June 26.

Budi said that the prediction for the peak of the Omicron BA.4 and BA.5 subvariant waves was predicted to occur in the second or third week of July 2022. This was based on observations that occurred in South Africa.

"If the pattern is the same as in South Africa, the estimated peak (in Indonesia) could be in the second and third weeks of July 2022," he said.

Budi said that South Africa is the country of origin for the emergence of the Omicron BA.4 and BA.5 subvariants which are currently experiencing an increasing pattern of cases.

"The death rate is about 10 percent of the peak Omicron," he said.

If Indonesia imitates the pattern that occurred in South Africa, Budi said, it is estimated that the peak of cases in the country will reach 30 percent of the peak of the Omicron, or the equivalent of 17,000 to 18,000 patients and after that it will fall again.

"However, the number of hospitalized patients and deaths is much lower than the previous wave," he said.

However, there are still several provinces in Indonesia, such as DKI Jakarta and Banten, which are already above 5 percent, so Budi appealed to the public to remain vigilant and not panic in the face of the current pandemic situation. OJK Plays A Role In Keeping The Financial Services Industry Free From Corruption, KPK Warns Not To Allow Banking To Become A 'Service' For Corruption 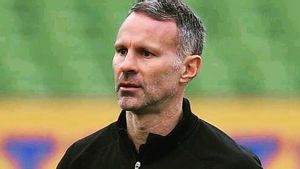 Viral Bu Oka, The Owner Of The Warung Please Bule, Dispar: These Are The Characteristics Of The Real Balinese Meet The Chair Of The Corruption Eradication Commission, The OJK Leaders Make Sure They Have An Internal Corruption Prevention System