JAKARTA - Deputy Speaker of the House of Representatives Sufmi Dasco Ahmad, assesses that the existence of a high-ranking TNI-Polri officer who becomes the acting (Pj) regional head does not need to be debated.

This was said by Dasco following a polemic regarding the appointment of the Head of the Central Sulawesi Regional State Intelligence Agency (Kabinda) Brigadier General Andi Chandra As'aduddin, as the Acting Regent of West Seram. Andi Chandra is an active TNI-Polri member.

"I think that policy, the Head of BIN (Sulteng) is still in active service. So I think it's a policy that doesn't need to be debated," he continued.

Meanwhile, the matter of appointing an active TNI is considered to have violated the TNI Law, the Police Law, the Regional Election Law, to the Constitutional Court's Decision No. 67/PUU-XIX/2021, Dasco said he would ask Commission II of the DPR to review it.

"Where is the law? We will ask the related commission first," said Dasco.

"But if the debate was active, whether or not there were active officials, there were still many who were still actively serving," he continued.

Previously, Coordinating Minister for Political, Legal and Security Affairs (Menko Polhukam) Mahfud MD, explained that the placement of active members of the TNI-Polri as acting (Pj) regional heads was in accordance with existing regulations.

"The issue of placing the TNI as the acting regional head is justified by the Government Regulation Act and by the Constitutional Court's verdict," said Mahfud MD, Wednesday, May 25.

Mahfud said that this was in accordance with Law Number 34 of 2004 concerning the TNI. Then, the placement of active members of the TNI-Polri as acting regional heads was also strengthened by Law number 5 of 2014 concerning ASN.

"(The law -ed) It says that the TNI and Polri are not allowed to work outside the TNI institutions except in 10 Ministries/Institutions, for example at the Coordinating Ministry for Political, Legal and Security Affairs at BIN, BNN BNPT and so on, it is permissible for the TNI to work there," explained Mahfud MD. . 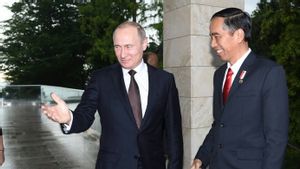 As A Result Of A Series Of Accidents, KSOP Labuan Bajo Issues A Warning When Crossing The Waters Of Pulau Kambing