"Many parties have suggested that NTB should have two special museums that present the history and impact of the eruptions of Mount Rinjani and Tambora," he said in a written statement quoted by Antara, Wednesday, May 25.

He said the two museums could give tourists an impression of the changes in world civilization caused by Mount Rinjani and Tambora.

"The construction of this museum will be directed to work together and become part of the Tambora Geopark and Rinjani Geopark," he said.

Meanwhile, the Head of the Education and Culture Office of NTB, Aidy Furqan, said that the plan to build the two museums had been discussed.

"This museum will immortalize the historical journey of Mount Rinjani and Tambora," he said.

In addition, the architecture of the building is local wisdom and is a replica of traditional buildings on the islands of Lombok and Sumbawa.

"Of course by paying attention to the elements of cultural or historical diversity, geology, biodiversity and so on, it supports the interests of education in NTB," said Aidy Futqon.

Meanwhile, the GM of Geopark Tambora, Hadi Santoso, said that the NTB governor was really serious about the program to build the museum.

"Following up the direction of the Governor and the Head of Education and Culture of NTB. We immediately coordinated with the relevant ministries. Thank God, the ministry's response was extraordinary. We pray that everything will go smoothly without a hitch," he said. 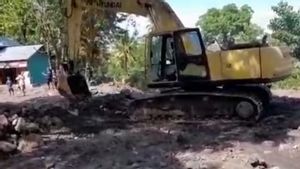 COVID-19 In The World Rises Again, The Highest Increase In Cases Is In Indonesia