"I appeal to President Jokowi and Minister of Home Affairs Tito Karnavian to appoint Betawi's son as Acting Governor of DKI in October 2022," said Forkabi Chairman Abdul Ghoni as quoted by Antara, Wednesday, May 18.

Ghoni considers Marullah Matali the right person to lead the capital, not only as a native Betawi son, but because he is considered intelligent, understands Jakarta's problems and is believed to bring Jakarta better for the next two years.

The member of the Gerindra faction of the DKI DPRD also believes that it is not too late for Home Affairs Minister Tito Karnavian and President Joko Widodo to appoint Marullah Matali as Acting Governor of DKI because it is still in the nomination stage to the president and there is a month before the inauguration will be held.

Previously, three names circulated and were predicted to have the opportunity to replace Anies, whose term of office ends on October 16, 2022, who left the DKI Jakarta DPRD through the Deputy Chair of the DKI Jakarta DPRD, Zita Anjani some time ago. 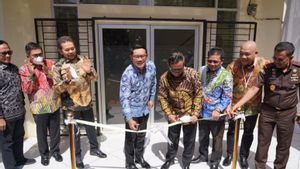