BANYUMAS - A man with the initials LR (29) was arrested by the Banyumas Police Narcotics Unit for abuse of class I narcotics, methamphetamine type.

The Head of Banyumas Police, Grand Commissioner Pol. Edy Suranta Sitepu, through the Banyumas Police Narcotics Head, Commissioner Adjutant of Police Guntar Arif Setiyoko, confirmed that his party had arrested the suspect on Tuesday, May 17, on the side of Bengkel Street, Kranji Village, East Purwokerto District, Banyumas Regency.

"We have received information that there is a man who is suspected of frequently abusing narcotics class I types of methamphetamine. Then an investigation was carried out for almost a week, and information was found that he was suspected of being a recidivist in the same case," said the Narcotics Head based on the written statement, Wednesday, May 18.

From the results of the arrest, the police evidence in the form of a transparent plastic clip containing methamphetamine with a gross weight of 0.33 grams, wrapped in red insulation, one glass pipette, one black straw, one red match, one black shorts, one Blue XIAOMI Redmi 6 mobile phone, one BCA ATM card, one red hanging rack, and a black Honda Beat motorcycle.

Furthermore, the suspect LR along with the evidence was taken to the Banyumas Police Narcotics Satres office for further examination.

"For his actions, the suspect is subject to articles in Primary Article 112 paragraph (1) Subsidiary to Article 127 paragraph (1) RI Law No. 35 of 2009 concerning Narcotics", concluded the Narcotics Head. 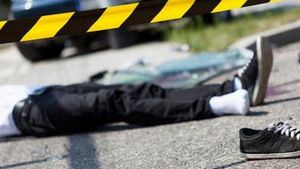 Data From The Central Java Provincial Government This Year There Are Already 20 Gratification Reports Worth Almost Rp. 30 Million Dominated By A Golden Interior, This Ukrainian Train Departs From Poland, Bringing Jokowi To Meet Zelensky Stumbling On A Drug Case, DJ Joye Gets An Assessment At The South Jakarta BNNK If There Is Tax Evasion, The DPRD Asks The DKI Provincial Government To Report Holywings To The Police