JAKARTA - Russian President Vladimir Putin hopes that the post-Soviet Union defense organization can continue to survive and thrive, including during the difficult times at Monday's meeting.

"I hope that the organization, which has developed into a full-fledged international structure, will continue to develop, I mean in difficult times," he said at a CSTO summit in Moscow.

"They never end, but the organization plays a very important, stabilizing role in the post-Soviet space. I hope that in this case its possibilities and influence on the situation in our zone of responsibility will only grow," Putin stressed.

On the same occasion, President Putin had said that his party was not worried about the plans for Sweden and Finland to join the North Atlantic Treaty Organization (NATO).

However, President Putin firmly warned that he would respond decisively if the US-led alliance supports military infrastructure for the new Nordic members.

"Regarding expansion, Russia has no problems with these countries - nothing. So in this case there is no direct threat to Russia from (NATO) expansion to include these countries," President Putin said at a meeting of the alliance of former countries. Soviet Union, Reuters reported.

"But the expansion of military infrastructure to this region will certainly provoke our response. What is it? We will see what threat it creates for us."

It is known that Moscow has been chosen as the venue for the CSTO Jubilee Summit because the Collective Security Treaty was signed here 30 years ago. And, the organization was founded on that basis 20 years ago, also in Moscow. British PM And US Secretary Of State Say China Failed On Hong Kong, President Xi Jinping: There Is No Reason To Change The System Blank Stock Runs Out, Kudus Samsat Is Still In The Process Of STNK Renewal 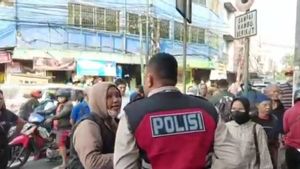 After Being Examined, The Mentality Of The Student Who Fought The Police Under The Kampung Melayu Flyover Is In Good Health