"Two Russian Raptor ships were destroyed in the early hours of today near Snake Island," the Ukrainian Ministry of Defense said in a statement distributed on social media.

"Bayraktar is at work," said Valeriy Zaluzhnyi, commander-in-chief of the Ukrainian Armed Forces, was quoted as saying in the statement, referring to the Turkish-made military drone.

The Raptor patrol boat can carry up to three crew members and 20 personnel. Patrol ships of this type are usually equipped with machine guns and are used in reconnaissance or landing operations.

Meanwhile, Snake Island became a symbol of Ukrainian resistance after a radio exchange went viral in which Ukrainian soldiers rejected demands from the crew of a Russian warship to surrender.

Earlier, the Russian warship, the Moskva, sank in the Black Sea in mid-April following what Moscow said was an explosion on board. Ukraine said it had attacked warships with missiles.

Separately, experts say while Russia may control the Black Sea, any amphibious attack on Ukraine's coast appears risky, as Kyiv missiles threaten to destroy Russian ships if they get too close.

According to British intelligence sources, Russia operates about 20 warships in the Black Sea, where the balance of power is now static, as Turkey blocks any access by ships belonging to warring parties under the Montreux Convention. To Prevent The Decline In The Value Of Confiscated Assets, The KPK Now Has A New Storage Building In Cawang 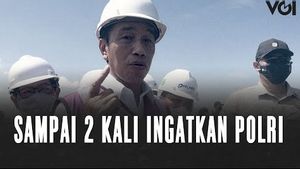 VIDEO: This Is President Joko Widodo's Statement Regarding The Case Of Brigadier J