After Luhut Refuses To Open Data On 110 Million People Wants 2024 Election To Be Postponed, La Nyalla: Lies, Can Be Reported To Police

JAKARTA - Chairman of the DPD AA La Nyalla Mahmud Mattalitti doubts the existence of big data of 110 million internet users who want to postpone the 2024 General Election, which was mentioned by the Coordinating Minister for Maritime Affairs and Investment (Menko Marves) Luhut Binsar Pandjaitan.

He said that after the big data claims emerged, a number of people did research on the truth. Most of the results do not match what Luhut mentioned.

In addition to responding to public research, La Nyalla assessed that real data related to 110 netizens wanting the election to be postponed should be made public as a form of transparency for public officials. However, if it is not done, it can invite the perception that a lie or hoax has occurred.

"That's fake news, that danger, if anyone is observant, it can be reported to the police," said La Nyalla, quoted from the Refly Harun Official YouTube channel, Tuesday, April 5.

According to La Nyalla, public officials must obey the 1945 Constitution which stipulates the term of office of the president and vice president for a maximum of two terms.

"We know that our constitution always says two periods, but we still insist on two periods," he said.

La Nyalla also claimed to be obedient to the constitution so that he was provoked to test the truth of the big data claims claimed by Luhut.

"Then if Pak Luhut said something that the 110 million people asked for three periods, asked for an extension, according to his big data. Finally it bothered me, because I have big data, we also check it when I see him podcast in one place, I see You know, how come Mr. Luhut can get 110 million," he said.

After testing the veracity of big data, La Nyalla found that very few netizens talked about postponing the election. In fact, the number does not exceed netizens who talk about the scarcity of cooking oil.

"As soon as I heard that I gathered my friends, let's take a look at the big data, we peeled it off, we met at half past six in the morning. That what Mr. Luhut said was not true. cooking oil, it's only 3.5 million," said La Nyalla.

"There are people who talk about postponing the election, but it's very small," he concluded. 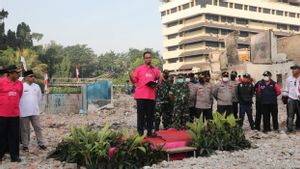