Gus Dur And Khofifah's Daughters Become PBNU Chairs, Alissa Wahid: It's Only A Matter Of Time

JAKARTA - Gus Dur's biological daughter, Alissa Qotrunnada Munawaroh Wahid or Alissa Wahid was chosen by the General Chairperson of Yahya Cholil Staquf to become the Chair of PBNU. Not only Allisa, there is the name Khofifah Indar Parawansa.

Speaking after being officially appointed, Alissa Wahid welcomed the representation of women in the new PBNU management structure. However, Allisa emphasized that so far, NU has actually opened up a wide space for women.

"This is a very important breakthrough in the history of NU's journey. Even though since the beginning of NU, the women's space has been very large," said Alissa at the PBNU office, Jakarta, Wednesday, January 12.

Alissa said, in every event, NU always provides a large space for nyai. And it's not just a matter of dealing with the kiai, but they are allowed to actively take care of activities in the public sphere.

"So it's only a matter of time and the timing is chosen at this time," he continued.

Alissa hopes that her and Khofifah's election as PBNU chairperson will also serve as a gateway to reopening NU women to be able to play a major role in various events.

Gus Yahya did include women in the composition of this board.

"This is the first time, after 96 years of NU's age, women are accommodated in the daily composition of NU PB," he said.

He said, NU would take an equal distance from various angles of political interests. The trick is to accommodate various elements of interest from a political point of view so that they can control each other.

"So that the distance between NU and various political parties remains the same," he explained.

The name of Khofifah Indar Parawansa, who is now the Governor of East Java, is also the chairman of PBNU. The Government Debt Relief Program Was Attended By 2,109 Debtors, More Than The Previous Year Ismail Bolong Comes To Bareskrim, Will Disbursed About Illegal Mining In East Kalimantan 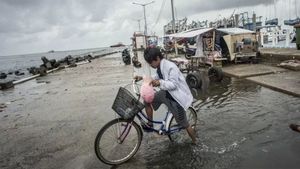 Christian Horner Is Associated With Ferrari, But Refuses Because It Is Bound Want Food For 600 Children And Cucumen Of BUMN Companies, Erick Thohir: What's Much To DO With Business Identification