"I have to assume it will happen in my life, and my shoulders are ready for the burden of responsibility. There is no way we will operate there, 1,000 kilometers from here, and I will return home without being able to complete the mission," he told the media as quoted from Sputnik News on December 23.

General Bar rejected reports that a lack of funds was hampering the IDF's operational mission.

"We are equipping ourselves with the F-35. We are buying thousands of Iron Dome interceptors for multi-layer defense," he explained.

The commander also alluded to a report last week from The New York Times that said the United States had rejected an Israeli request to speed up the supply of Boeing KC-46 Pegasus refueling planes.

The jets will be delivered under a $2.4 billion deal signed by the United States and Israel last year. According to the newspaper, Israel considered the planes "essential to attack Iran's nuclear facilities. The characteristics of the KC-46 allow the aircraft to refuel three jets at once in four minutes.

Bar underlined that he did not know why the White House had rejected Israel's request but stressed he had not exhausted the possibility of acquiring at least two (the jets) beforehand.

It is important to note that relations between Israel and Iran have been strained since the 1979 Revolution in Tehran. At that time, supreme leader Ayatollah Khomeini took a sharp anti-Israel stance, severing all ties with his neighbor. Over the years, both sides have engaged in revenge attacks, but have avoided direct military conflict.

Relations between the two sides have deteriorated further because of Iran's nuclear program, which Israel views as a threat to its very existence. In 2015, Iran, Britain, China, France, Germany, Russia, and the United States signed the Joint Comprehensive Plan of Action (JCPOA), commonly known as the 2015 Nuclear Deal. Under the agreement, Iran gave up its nuclear program in exchange for the lifting of economic sanctions and an arms embargo.

Israel strongly opposes the JCPOA, with former Prime Minister Benjamin Netanyahu arguing that the deal "does not stand in Iran's path" to (developing a nuclear bomb), but instead opens Iran's path to it.

Donald Trump, President of the United States in 2017, also strongly criticized the deal and in 2018 withdrew the country from the treaty despite warnings and criticism from other signatories.

After taking office, the new US President Joe Biden voiced his intention to revive the JCPOA. President Biden's personal wishes, however, were somewhat hampered by the White House pushing for more restrictions to be included in the agreement. 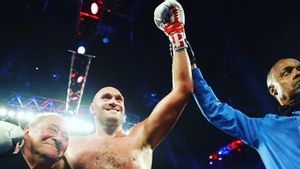 Tyson Fury Teases Francis Ngannou: If You Want Real Money, Let's Get Into The Boxing Ring