JAKARTA - The Watcher film, starring Angga Yunanda, Caitlin Halderman, Teuku Ryzki and Yudha Ramadhan will be screened on Disney+ Hotstar on September 24. The Watcher's director, Anggy Umbara told about the challenges she faced while working on the film produced by MD Pictures during the pandemic.

"The first challenge we feel the most is that we are filming in a situation that is not very supportive, right. This situation makes it difficult to move anywhere," said Anggy in an online discussion, Wednesday, September 22.

The small number of crew and limited locations are a challenge for Anggy, because in this condition he still has to be able to make an entertaining story. "It's difficult to get together, so we can't have a lot of crew either. We shoot only 42 people and that's a very small number for a film production," Anggy continued, quoted from ANTARA.

Even so, Anggy said that filming should still be carried out with fun. Because according to Anggy, fun shooting can keep the crew and cast happy so that immunity is maintained during the production process.

Regarding the limited crew and locations, a representative from MD Pictures Karan Mahtani explained that the filming process for The Watcher was carried out in a closed place so that no crew would enter or leave the location.

"We make our own bubble. No one can leave, no one can enter to secure everything. Even if new people come in and out, there is a protocol. There is PCR, there is a swab to guard it," said Karan. 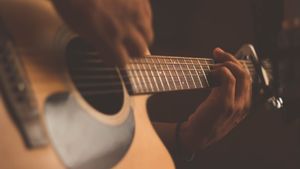 Cases Continue To Decrease, COVID-19 Patients In Garut Only 11 People There Is Karni Ilyas's Son In The LRT's Board Of Commissioners