JAKARTA - The names of Greysia Polii and Apriyani Rahayu are being discussed. The reason is that the two women's doubles badminton athletes won gold medals at the Tokyo Olympics which will be held on Monday, August 2, 2021. Both won against China's women's doubles, Chen Qinchen and Jia Yifan.

Paired for the first time in 2017, Greysia Polii and Apriyani Rahayu made a surprise by winning the 2017 Thailand Open title followed by the 2017 French Open title.

Often seen as compact like a couple on the field, it turns out that Greys and Apri--as they are known as both--are very close off the field. The proof, they often spend free time together.

Adapting the Brilio.net page, Monday, August 2, these are six portraits of the closeness of Greysia Polii and Apriyani Rahayu spending time together during the off match.

Greysia Polii and Apriyani Rahayu were present together at the prestigious 2018 Sport Awards award night. Both of them won the award as the favorite women's couple 2018.

Greysia appeared with a loose hairstyle, while Apriyani kept her hair short.

They often go out together in their spare time. In this portrait, for example, Greys and Apri are seen hanging out in a shopping center to celebrate Greys' birthday.

In addition to competing, the two also often receive photo shoot offers for sponsors. At this moment, Greys and Apri took a photo for their sponsor, VICTOR.

This is the first portrait of Greysia Polii and Apriani Rahayu abroad in 2017 when they both won the 2017 French Open. 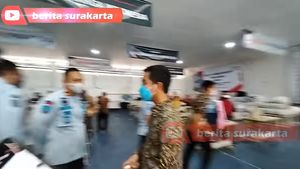 KKB Had Shot At Papua, The Evacuation Of One Of The Two Bodies Of Female Health Workers Was Successfully Carried Out Haji Lulung: Young People Have A Big Role In PPP