JAKARTA - The stories about adherents to the polyamorous lifestyle are endless. This time it was from Rosie, Ty, and Kaneshia.

Polyamory is a romantic relationship carried out by more than one person at the same time. Polyamory is done on the basis of feeling like each other so that people in this relationship know the purpose of what they are doing

Rosie Haley, 24, told her 23-year-old husband, Ty, several years after their marriage, that he was bisexual. In May 2018, the couple met Keneshia Petty (23) on Tinder and within two months they were living together.

The love triangle became official when the couple got engaged to Keneshia, even though their family didn't give their blessing.

Rosie and Ty met when they were 17 and married a year later. Two years ago everything changed. They took Tinder and started talking to Keneshia. They dated him.

Ty, who works in the defense force, was assigned to the Middle East two years ago when Rosie proposed to Keneshia while watching on Skype.

And when he returned home in February 2019, he also proposed to seal the deal. The three of them got married in 2020.

"Poliamori means ethical and authentic love that is encouraged and supported by each of us," Keneshia said as quoted by the Daily Star, Thursday, December 3.

"Being in a group (polyamory) means more love, more understanding and more encouragement. Living together is neither difficult nor easy. There are lots of adjustments, compromises, and figuring out where to put my things in a made cupboard. for two people! "

Rosie wasn't jealous of the proposal and was delighted to have "more friends."

He explained: “I was very nervous before asking her to marry me. I've been planning it for months and decided to wait until his birthday. "

However, not everyone agrees with the unconventional relationship. Rosie's grandparents were not happy.

“Polyamory is a legal form of relationship and there is nothing wrong or immoral about it. We all really, really love each other. This is not a sex cult, a religious cult or a sect in general, "he said.

"We have free will, our identity and our love, which is as beautiful as love between two partners," he concluded. 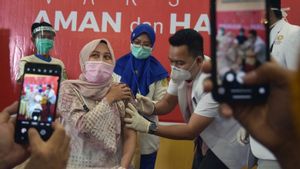 Initially An Affair, This Woman Is Now Happy To Live A Polyamorous Relationship These Polyamory Adherents Tell How To Share Their 'Sleep' Each Night