The Facts Behind The Secret Nicknames Of Prince Charles And Camilla, Fred And Gladys

JAKARTA - In the fourth music of the Netflix series, The Crown, viewers are given a deeper insight into the love triangle between Prince Charles, Camilla Parker Bowles, and Princess Diana.

One detail that may surprise viewers is that Prince Charles and Camilla each had secret nicknames before Charles was in a relationship with Diana.

In The Crown, Camilla refers to Charles as Fred and himself as Gladys at lunch with Diana.

In the next episode, Diana finds the blueprint for the bracelet engraved with the letters G and F.

The reason why they use the secret pet names Fred and Gladys, is because they are characters from The Goon Show.

Prince Charles and Camilla have been calling each other nicknames since they started dating in their 20s.

The Goon Show, a British radio comedy show on the BBC, was one of Prince Charles' favorites, and he bonded with Camilla for their love of the show.

The Goon Show started in 1951, lasted less than a decade, and ended in 1960. Fred and Gladys are two of the most frequently featured characters.

This is a pivotal moment in The Crown where Diana realizes that Charles still loves his ex-girlfriend.

The Crown does take some liberty when it comes to storytelling, and it does happen.

A few weeks before Charles and Diana's wedding in 1981, Diana found a bracelet with the initials Charles and Camilla in the office of one of Charles's employees.

Diana told her biographer Andrew Morton in 1997: “One day I walked into this man's office and said, 'Ooh, what's in that parcel?' And he said, 'Oh, don't look at that'.

“So I opened it and there was a gold chain bracelet with blue enamel discs. 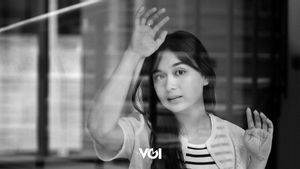 Exclusive: Chintya Gabriella Struggles To Build A Career As A Cover Singer Sri Mulyani Jamin, Safe Business Activities Ahead Of The General Election: There's Nothing To Worry About January 28, All Regions In East Kalimantan Are Predicted To Be Rainy And Winded Al Hidayah Mosque That Was Burned By ODGJ Ready To Rebuilt, Garut Police Chief: Will Be Better