"I once told my wife now. This is serious, after this I will definitely be canceled by feminists, but please it's okay. I once said to my wife, 'you are fat, obese, I'm divorced', "said Deddy Corbuzier on Marcel Radhival's YouTube channel, quoted Wednesday, August 10.

Deddy admitted that he did not want to accept himself as he was, so he tried hard to achieve success. He felt sure that even Sabrina couldn't accept him at this time if he didn't succeed. Because of that, Deddy felt it was natural not to accept Sabrina as she is.

"I'll tell you the answer. Never mind accepting you as you are, I can't just be what I am. If I accepted me as I am, you wouldn't want to be with me. As I am, I don't work, I wake up late, I'm fine. what do you do, wake up late, get money, my mother and father are rich. But it turns out there is nothing, "he explained.

Deddy Corbuzier did this for the benefit and good of them all. "So I can't accept you as you are. Both are trying their best," concluded Deddy Corbuzier. 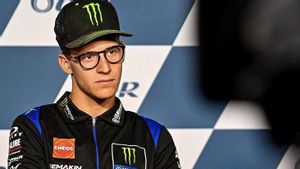 Feeling The Motor Is Compensable With The Character Of The Buriram Circuit, Quartararo Sures To Win The Thailand MotoGP