Beautiful With Red Lipstick After Giving Birth, Uut Permatasari Explains The Meaning Of The Name Of The Second Child Of The Gowa Police Chief

JAKARTA - Pedestrian Uut Permastasari shared the happy news about the birth of his second child with the Gowa Police Chief, South Sulawesi AKBP Tri Goffarudin Pulungan. The son who was given to Rafaizan Rakhan Athallah Pulungan was born on Friday, July 1.

Uut uploaded a photo of him lying in a hospital bed holding his son, who is a boy. Even though she has just given birth, Uut looks fresh, energetic, and still beautiful with red lipstick on her lips.

Uut also revealed the beautiful meaning of the second child's name. "Leaders of high rank who have a noble heart, a gift from God and descendants from Pulungan," he continued.

Uut also hopes to pray that the child will become a religious person and devoted to the country. "Thank you, O Allah, and our prostrations of gratitude for this most beautiful gift. May our son become a pious child, with good morals, useful for religion, family, and society, nation and state. Amen, rabbal 'aalamiin," he concluded.

Giving birth at the age of 40 years has a higher risk compared to younger mothers. Uut said he wanted to give birth normally, but that wish could not be fulfilled for the safety of the mother and baby.

Due to the transverse position of the baby, Uut finally had to undergo a cesarean section. "So for the safety of Mother and her baby, Doctor Herawati and I finally decided to give birth by caesarean section. Thank God my second son was born at 09.15 WIB safely and healthy with a weight: 3.3 kg and TB: 49 cm," he wrote.

"Thank you to my beloved ones: my husband, my son, Mas Rafif, my mother who has accompanied and prayed for Mama to be given a smooth and safe caesarean delivery," concluded Uut Permatasari. Dewi Perssik Is Angry With Her Husband But Asks For A Salary, Angga Wijaya: That's The Manager's Percentage Intimate Like A Newlywed, Take A Peek At 5 Portraits Of Syahrini And Reino Barack On A Luxury Vacation In Japan Besides Lisa, Lucinta Luna Is Confident In Calling The Results Of Operations Similar To BLACKPINK's Jisoo 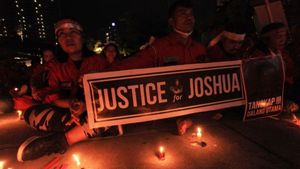