Faza said that the Jukiverse NFT Exhibition was deliberately held in a hybrid manner so that it could reach more fans and even abroad. In addition, Faza also feels that as a creator, he must be able to adapt to the times.

"When we launched Jukiverse NFT, the audience was not only from Indonesia. In fact, buyers from Indonesia, I might say, only 20-30 percent. Many fans from America, China, France, New Zealand, and others. We want Jukiverse holders to participate feel the excitement, that's why we also make the metaverse," said Faza when meeting the media in Sarinah, Jakarta, Thursday, June 3.

He hopes that this event can make his steps to go international even more solid. "Because when we talk about NFT, there are no national boundaries. Our work can be enjoyed by anyone more easily," he said.

Along with the opening of the Jukiverse NFT Exhibiton, there was also the launch and auction of five NFT Si Juki x Sarinah Wastra Nusantara editions. 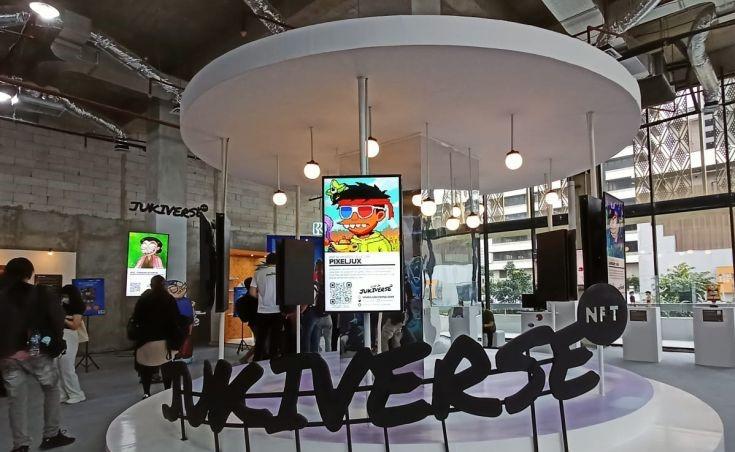 For information, Si Juki has been around since 2011 and has become the most popular comic character in Indonesia. Starting from online comics on social media, Si Juki was then published in various forms of media including printed comics, webtoons, mobile games, animated series, to animated films.

In addition, Si Juki has also successfully released 3,456 NFT collections "Lost in Jukiverse" which sold out in minutes. There is also a collection of "Si Juki Cosplay" with a total of 110 cosplays, as well as "Jukiverse X" which involves 34 Indonesian NFT artists including WD Willy, Arya Mularama, Arief Witjaksana, and Darbotz.

Rekata Studio Director Pramudya Andika said that his party was very interested in holding the Jukiverse NFT Exhibition after seeing the high enthusiasm of fans for Si Juki's IP and Si Juki's consistency to continue to grow.

“We have been following the development of Si Juki for a long time, starting from comics to national and international projects. The Juki has always been something consistent. We hope that Faza will continue to provide opportunities for Rekata for future projects," added Andika.

With the Jukiverse NFT Exhibition, Faza hopes that public literacy about NFT can continue to increase.

"So, this event is not only an exhibition but there will also be a talk show to educate the public about what NFT is. Because in my opinion, NFT is just a tool, in the end, how do we react to it, how can we research before buying it," concluded phase.

To enjoy the Jukiverse NFT Exhibition, all you have to do is visit jukiverse.com/exhibition then choose to buy a visit ticket in person at Sarinah or virtual at metaverse. Playing Amsterdam, Christian Bale And Margot Robbie Have Fun Together Hugh Jackman Returns To The Close Role In Deadpool 3 Film Meta Block Thousands Of Fake Accounts From China And Russia