JAKARTA - Bio One surprised people with its super skinny appearance. His cheeks were crooked, his face was oval, and his body was thin like a sick man. But, it turns out that Bio One is not sick.

"Diet? Yes, that's one of them following this figure. Yes, there are many things to do. Studying gestures, because you have to follow this figure, if I'm wrong, you don't feel good with people out there who think he's legendary," he explained, met at MNC Tower, Central Jakarta, Monday, December 6th. He did detailed research on the original Srimulat cast who started their careers in the region. They transformed into mega stars in Indonesia in the 1980s and 1990s, with tens of millions of fans spread across various regions in Indonesia.

"We all know that Sirmulat is a legendary character. And to be able to reach this human, we explore many things. We check the background of life, a lot of research has been done," said Bio One.

The figure of Gepeng who is no longer wanted by Bio One to be totally revived. Therefore he had no problem when his body became thin.

"We do the same thing, research all kinds of things. For this, it is mandatory in the acting world, for weight, because as the name implies, it's flat if it's not flat it means it's not flat. If you ask how, maybe each role here has its own method, Mr. Asmuni , Brother Paul all have responsibility for weight. Everyone has their own method, "said Bio One. 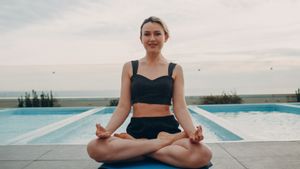 Adorable, 3 Photos Of Natasha Wilona As A High School Child In The Dikta And Law Series