JAKARTA - Minister of Finance, Sri Mulyani, shared a moment while attending a working meeting of the House of Representatives Commission I regarding the elimination of two Navy (AL) ships, namely KRI Teluk Mandar-514 and KRI Teluk Penyu-513. During the meeting, Sri Mulyani was also accompanied by Prabowo Subianto as the Minister of Defense.

Interestingly, from the 8 photos uploaded on Instagram @smindrawati, there is one photo that shows Prabowo Subianto helping Sri Mulyani to sit down.

After helping Sri Mulyani to sit down, Prabowo then took a position to occupy the seat next to Sri Mulyani. Another photo shows Sri Mulyani talking to Prabowo.

In her post, Sri Mulyani explained that she attended the House of Representatives Commission I meeting with Defense Minister, Prabowo Subianto, to discuss the removal of two ships belonging to the Indonesian Navy on Thursday, January 27. First, KRI Teluk Mandar-514 with an acquisition value of IDR 121,897,258,397.0. This ship was purchased in 1979.

"The two ships are already in a heavily damaged condition and are not safe and inefficient, so the removal of the two KRI ships does not interfere with the duties of the Indonesian Navy", Sri Mulyani wrote, quoted by VOI on Friday, January 28.

"The Ministry of Finance (APBN #uangkita) continues to support the modernization and renewal of the TNI's military equipment through the Ministry of Defense budget which continues to increase and gets high/top priority", she said.

This is evident from the budget for the defense function based on the 2010 Central Government Financial Report (LKPP) which was only IDR 17.08 trillion. However, it will increase to IDR 117.96 trillion in 2020.

"Improving governance, including the procurement process that is efficient, sure, and clean from KKN is important so that the budget for the procurement of defense equipment can result in repairs of military equipment that are strong, of appropriate quality and increase Indonesia's defense and security capabilities", she said. 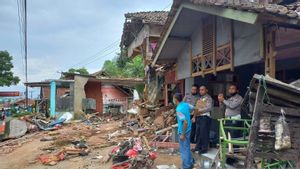