JAKARTA - President Joko Widodo (Jokowi) has approved the use of the state budget (APBN) for funding the Jakarta-Bandung high-speed rail project. As is known, the project financing swelled to 7.97 billion or equivalent to Rp26.6 trillion. Initially, this project was calculated to cost 6.07 billion dollars through the cooperation of the Indonesian and Chinese governments.

The use of the APBN for the Jakarta-Bandung High-Speed Rail project is revealed in Presidential Regulation (Perpres) Number 93 of 2021 which was only signed on October 6, 2021. The regulation is an amendment to Presidential Regulation Number 107 of 2015, concerning the Acceleration of the Implementation of Infrastructure and Facilities for the Jakarta-Bandung High-Speed Train.

One of the changes in the regulation is the issue of funding. Where Jokowi initially promised that the construction of the megaproject would not use state money. However, with the issuance of Presidential Decree No. 93/2021, the project can now use the state budget.

"Other funding as referred to in paragraph (1) letter c can be in the form of financing from the State Revenue and Expenditure Budget in the context of maintaining the sustainability of the implementation of National Strategic Projects by taking into account fiscal capacity and sustainability," reads Article 4 paragraph 2 of Presidential Regulation (Perpres) Number 93 Year 2021, quoted Sunday, October 10.

"Funding for the implementation of the assignment as referred to in Article 1 comes from (c) other income in accordance with the provisions of the legislation."

As is known, the head of the consortium that can receive state budget funds is PT Kereta Api Indonesia (Persero). Because through Presidential Decree 93, Jokowi officially appointed KAI to be the head of the BUMN consortium tasked with working on the Jakarta-Bandung high-speed rail project, replacing PT Wijaya Karya (Persero) Tbk.

While Article 4 paragraph 2 of Presidential Regulation 107 reads, "the implementation of the assignment does not use funds from the APBN and does not get government guarantees.

"In 2015, Jokowi said that the development of trains in Indonesia was really needed. Especially fast trains. However, the government did not want it to burden the budget so that the business-to-business (B to B) approach was the government's choice.

Furthermore, Salursa said that after being calculated in November 2020, the costs turned out to be stretched to 8.6 billion US dollars. Furthermore, based on a study involving consultants, the cost of the project went up again. One of them is due to land acquisition.

"After a study was carried out with the help of consultants, this project developed after changes in costs and prices and delays due to land acquisition and so on, PSBI's estimates are in the low and high scenario. Low 9.9 billion US dollars, and high 11 billion US dollars," he said.

After knowing the swelling, said Salursa, KCIC management assisted by consultants to make efficiency to reduce financing. He emphasized that in the future KCIC will continue to review and negotiate with the HSRCC consortium of contractors to be able to reduce the estimated cost overrun value.

Salursa said, based on the initial agreement that the additional costs in the running of the project or cost overrun will be charged in best endeavor according to each shareholder.

For your information, the funding for the Jakarta-Bandung high-speed rail project is funded by 75 percent or US$4.55 billion by a loan from the China Development Bank. Meanwhile, 25 percent of project needs are funded from equity. 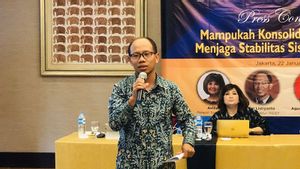 Indef: Lebaran Becomes The Savior Of The Economy In Quarter II/2022