Bad News From Garuda Indonesia: Because They Are Carrying Passengers Who Are Positive For COVID-19, They Are Not Allowed To Fly To Hong Kong

JAKARTA - Garuda Indonesia is temporarily banned from flying passengers to Hong Kong. The ban was issued by the Hong Kong Ministry of Health after four positive COVID-19 passengers were found on a flight from Jakarta.

President Director of PT Garuda Indonesia (Persero) Irfan Setiaputra spoke about the news. He emphasized that the passengers who had flown on the Jakarta - Hong Kong flight route had been tested negative for COVID-19 through the polymerase chain reaction (PCR) test.

"There was a Garuda passenger who was tested negative domestically, so we were allowed to board the plane. In Hong Kong, the PCR test (again) turned out to be positive," he said when contacted by VOI, Wednesday, June 23.

As a result of the incident, said Irfan, Garuda was prohibited from flying with passengers to Hong Kong. Thus, the flight of the state-owned aircraft will only be based on goods or cargo.

"As an airline we are prohibited from bringing passengers until July 5 to Hong Kong. We will only carry cargo," he said.

Irfan regretted this. Because, according to him, the plane is the safest place from COVID-19. Moreover, Garuda Indonesia has used HEPA (High-Efficiency Particulate Air) technology or strong particle filtering throughout the aircraft.

"There are also several airlines that enter Indonesia and after being tested how many passengers are positive. It should also be banned, yes," he said.

For your information, reported by news.gov.hk, Wednesday, June 23, the Jakarta-Hong Kong passenger route belonging to Garuda Indonesia is prohibited from operating for two weeks from June 22 to July 5, 2021.

The Hong Kong health department made the decision after four Garuda Indonesia passengers on flight GA876 tested positive for the virus on Sunday, June 20. This was only known after they carried out a PCR test when they arrived in Hong Kong from Jakarta. 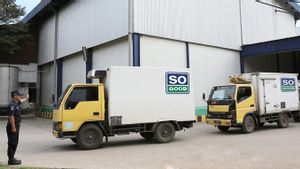 Was Delayed, Finally The Incentive Fund For COVID-19 Funeral Officers At OKU Cair