JAKARTA - China recorded the biggest increase in total energy consumption and coal use in a decade in 2021, as the economy recovered from the COVID-19 slowdown a year earlier.

China was the world's largest coal burner and emitter of greenhouse gases, using 5.24 billion tonnes of energy equivalent to standard coal last year, up 5.2 percent from 2020, the National Bureau of Statistics said. NBS).

The growth rate was the highest since 2011, according to Reuters records based on official data. NBS also said coal consumption in China rose 4.6 percent in 2021, also the strongest growth rate in a decade.

The government has pledged to limit construction in high energy consuming industries and has urged companies to conserve energy and improve efficiency, with soaring fossil fuel use undermining plans to cut carbon emissions.

President Xi Jinping has pledged to bring the country's carbon emissions to a peak by 2030 and achieve carbon neutrality by 2060. However, he has not set limits on total energy use or on carbon emission levels.

Despite strict measures including limiting electricity use in some regions, China's energy intensity - a ratio that measures how much energy is used per unit of economic growth - fell 2.7 percent in 2021, compared with a targeted reduction of "around 3.0 percent." " for this year.

Analysts fear China is loosening environmental pledges to shore up an economy beset by supply chain disruptions and "zero-COVID" restrictions.

"Energy security trumps decarbonization ambitions in at least the short to medium term for China and we expect the country's coal demand to continue to increase steadily," said Rystad Energy analyst Justin Jose.

China is scheduled to reveal its energy intensity and carbon intensity targets - which measure how much carbon is emitted as the economy grows - on Saturday (5/3/2022) during the annual parliamentary meeting. Speed Basic IKN Infrastructure Development, Minister Of PUPR: It Is Hoped That Investors Will Enter The Second Quarter Of 2023 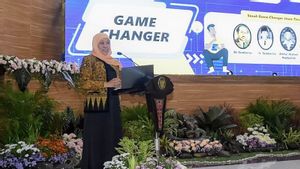 2.219 Refugees Due To Semeru Eruption Accompanied In 12 Locations, East Java BPBD Continues To Be Distributed By Assistance Until Tonight The Condition Of 2 Victims Who Were Hit By The Material Impact Of An Earthquake With A Magnitude Of 6.1 In Garut Began To Improve