JAKARTA - Minister of State-Owned Enterprises (BUMN) Erick Thohir revealed that he received a message from the 5th President of Indonesia Megawati Soekarnoputri when he first served as minister. He said Mega's message was related to the BUMN business.

"In line with my meeting, when I first became the minister of BUMN, when she was called Bu Mega, how did she describe that BUMN should not be an octopus with a small head, a lot of arms. It's an unhealthy octopus," he said, in the Indonesian Coffee Dialogue which the PDI-P DPP was held on Monday, January 17.

According to Mega, continued Erick, a healthy octopus is an octopus that has a large head and few legs.

Furthermore, Erick said Mega's message was in line with the steps taken by the Ministry of SOEs in carrying out the transformation. So, later on, these state-owned companies will transform and form an ecosystem, each of which is in accordance with the core business.

"He said it was a healthy octopus, his head was a little big and his feet were a little bit, that's why we at state-owned enterprises are transforming to encourage these SOEs to become separate ecosystems, one with another," he said.

As is known, transformation has indeed become one of Erick Thohir's main programs at the Ministry of SOEs. The latest is the establishment of ID FOOD or Food SOE Holding led by RNI.

"Alhamdulillah, yesterday we also just launched the SOE Food Holding. Where previously 8 companies were turned into 5," he explained. 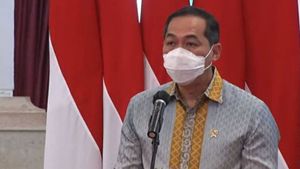 The Skipper Of 'Flying Fish' Accidentally Runs Aground Ship In NTB Waters Due To Engine Trouble, 2 French Caucasians Successfully Evacuated