JAKARTA - In the midst of the heated situation in the North Natuna Sea, Riau Islands, the government has brought in advanced military technology, namely two Frigates of the Arrowhead 140 type. What are the specifications of this ship? What can we expect?

The arrival of the Frigate Arrowhead 140 was widely discussed after a viral video showed the threat of Chinese ships in Indonesian waters. The video shows a number of local fishermen confronting Chinese warships in the Exclusive Economic Zone (EEZ) of the North Natuna Sea.

The large Chinese ships are said to have made many fishermen afraid to go to sea. Many view the Frigate Arrowhead 140 as Indonesia's answer to the Chinese threat.

Video of the Natuna fishing alliance of the Republic of Indonesia the Chinese destroyer Type 052D. "Kunming" with number 172 entered the Indonesian EEZ in the North Natuna Sea, September 13, 2021 pic.twitter.com/GPdNGPMiE1

According to Dasco, the arrival of the Frigate Arrowhead 140 is a continuation of the cooperation between Indonesia and the UK. Indonesia plans to build hundreds of frigates.

"Rest assured the Chinese navy will tremble to see the Arrowhead 140 frigate patrolling the Indonesian seas, and will think twice about the soldiers in the Natuna seas again," said Dasco.

The two ships that are now being brought in are initial, where the assembly will be carried out domestically. Frigate manufacturer Babcock International will assemble the two ships at PT PAL's shipyard in Surabaya, East Java.

Even so, it has not been explained when the first plate cutting was carried out as a marker for the start of ship assembly. Even with the target of completing the ship assembly.

What is clear, the two Frigate Arrowhead 140 are priced at 240 million pounds or the equivalent of IDR 4,906,985,397,500 - at an exchange rate of IDR 19,627.24 per unit. The signing was carried out by Babcock International CEO David Lockwood and PT PAL President Director Kaharuddin Djenod.

The historic cooperation signed aboard the HMS Argyll was also witnessed directly by the Minister of Defense (Menhan) Prabowo Subianto. From the British side, Defense Minister Ben Wallace MP was also present.

In a written statement, Babcock International explained that the inauguration of the design license between his party and PT PAL allowed Indonesia to modify the special design for the Indonesian Navy (AL). Even so, all components of the Frigate Arrowhead 14 were imported by Babcock.

"This is part of our strong Frigate Arrowhead portfolio. What's more, the design license and subsequent development program will be a significant catalyst for prosperity in Indonesia," he said.

This collaboration also ensures that the work is carried out by local Indonesian workers. This is referred to as an added value that allows contribution on the socio-economic side of Indonesia.

As described, the Frigate Arrowhead 140's design is a plus. In addition to customization, the basic design of the Frigate has special features in the hull shape, which have been proven and tested in real-terrain operational environments.

These ships are used by NATO countries and coalition task forces as well as regional operations and national deployments. The Frigate can be used as a mini-carrier for Navy helicopters.

This advantage is important in personnel shuttle missions or search and rescue (SAR) operations. This British-made military technology is said to be the most advanced today. The Arrowhead 140 is equipped with anti-aircraft missiles and anti-submarine torpedoes.

The frigate is a type of high-speed light ship with excellent maneuverability. The Frigate has a 4 x 9100 kW main engine.

Its power supply is capable of driving a maximum speed of up to 28 knots, with a maximum continuous rating (MCR) condition and resistance at 18 knots of 9,000 NM. The ship is also equipped with a 4 x 1360 kW diesel generator and a 1 x 180 kW emergency diesel generator.

For maneuvering features, this ship is equipped with a bow thruster of 925 kW. The Frigate Arrowhead 140 also has medium and long range vertical missile launchers.

This makes the Frigate Arrowhead 140 reliable in sea and air defense. In addition there is also a long-range vertical-to-surface missile launcher.

*Read other information about NATIONAL NEWS or read other interesting articles from Yudhistira Mahabharata. 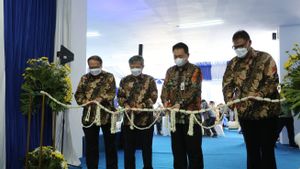