JAKARTA - Police are reviewing the removal of permanent bike lanes in Sudirman. Sounds like a setback. Police are looking at the lack of effectiveness of bike lanes due to numerous offences. It's starting to make no sense. Another reason, an accident that caused a car to roll over after crashing into a bike lane protector. All right, this is ridiculous.

Permanent and protected bike lanes on Jalan Jenderal Sudirman were installed in February 2021. Permanent barrier in the form of planter box made of concrete that makes cyclists can gowes more safely and comfortably. The discourse on the elimination of protected bike lanes was declared by the Polda Metro Jaya.

Kasubdit Gakkum Ditlantas AKBP Fahri Siregar said the discourse of elimination arose through a number of considerations, including the effectiveness of the existence of bike lanes. Bike lanes are often crossed by motorcycles. On the other hand, many cyclists do not cross the provided permanent lanes. Those things make bike lanes ineffective in his eyes.

This way of thinking is wrong. Public policy observer from Trisakti University, Trubus Rahadiansyah argued that it was precisely the duty of the police, to enforce discipline. The logic is simple. Imagine a red light. Do we have to take out every red light at the intersection when a lot of people break through?

"Now it is precisely the existence of it (protected bike lanes) in the framework of traffic order. If all violations are committed it should be the responsibility of the police to provide protection to bicycles. Misguided thought. I think it's a counterproductive policy," Trubus said, contacted by VOI on Monday, May 10.

The Bike2Work Indonesia community, in its statement, responded critically to this discourse. The discourse on the abolition of bike lanes is a setback in an effort to encourage environmentally friendly mass transportation as the new norm in the Capital. Bike2Work also criticized the support of Commission III member Ahmad Sahroni on this discourse.

Sahroni reflects on the lack of public understanding of the cycling lifestyle. Sahroni only sees this issue from the point of view of sports bikes that do not require special lanes. In fact, cycling life is much wider. Commuters, for example, who use bicycles daily for activities.

"B2W Indonesia believes the existence of permanent bike lanes is necessary to support the dki government's efforts to realize a transportation system that prioritizes human displacement, not private motor vehicles," it said in a release.

Impartiality in a particular group

If it is not a defect of logic that is too elusive, then the emergence of this discourse of the elimination of bike lanes is evidence of the impartiality of authority in a particular group. There is something interesting about kasubdit Gakkum Ditlantas AKBP Fahri Siregar's statement, when he alluded to a traffic accident involving a car.

"We reviewed again, like yesterday there was a traffic accident, although the main cause is not the bike lane is permanent, but the fatality, once hit the permanent bike lane it's fatality there. So the vehicle was hit harder because he (the barrier) was made of concrete weighing 300 kilograms," said Fahri, written Detik.

Fahri's accident happened last month. At that time a car rolled over after crashing into a permanent bike lane barrier on Jalan Jenderal Sudirman, Central Jakarta. Fahri's statement became a question in the head of Bike2Work Chairman Poetoet Soedarjanto, about how Fahri manages his perspective.

"I see the hell there is. So this is like a partiality to the motorists, including the car industry, fuel companies as well. So it's less siding with the community of bicycle users," Trubus said.

This discourse is unfortunate by Bike2Work. When the world's cities began to realize the concept of modern transportation that prioritizes human displacement --not the displacement of motor vehicles as mentioned earlier, Polda Metro Jaya instead invites us to step down.

Like other cities that embrace modern layouts, priority should now be given to pedestrians and cyclists. Jakarta has just pioneered this, making it a new norm through Regulation of the Minister of Transportation No. 59 of 2020 concerning The Safety of Cyclists on the Road.

Polda Metro Jaya as an authority should support this policy, not encourage it. "In addition to being impressed by handwashing, the police can also be seen as opposed to efforts to create a better, more livable city, preferring the people who inhabit it," it said in a press release.

That's why Bike2Work encourages a number of issues. First, encourage all parties to increase their commitment to advancing bike lanes. This is nothing, this is the mandate of Law No. 22 of 2009 on Traffic and Road Transport. Second, "encourage police officers to be stronger and actively control bike lane policies."

Finally, Bike2Work also asked officials, including members of the House of Representatives, to change their mindset on the issue of urban development and transportation systems.

*Read more information about JAKARTA or read other interesting writings from Diah Ayu Wardani as well as Yudhistira Mahabharata. Have 15,000 Outlets, Work At Alfamart Get A Salary Of Up To IDR 9 Million But The Lowest Is IDR 800,000? This Is The Response Of Conglomerate Djoko Susanto's Subordinates Ali Kalora's Habit Was The Cause Of His Shooting Death 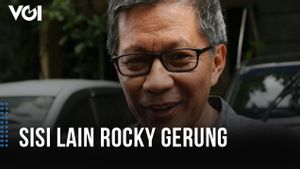 The Invasion Of Imports From China To Indonesian-made Steel Is Bad, Krakatau Steel's Boss Responds Casually: Our Products Are Used In Europe Want To Intern At 5 Super Priority Tourist Destinations? This Is The Position Required COVID-19 Case Slopes, Minister Of Home Affairs Tito: Must Prepare Scenarios If There Is A New Wave Of Variants 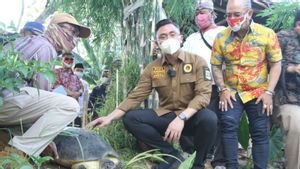