AI Technology Can 'Resurrect' A Deceased Korean Musician: It Is Getting A Lot Of Attention And Controversy

JAKARTA - The use of Artificial Intelligence or AI in South Korean music industry has attracted people's attention. The application of this technology to deceased musicians has caused controversy.

The SBS television channel created a new program entitled Competition of the Century: AI vs Human. This event brings singers from AI against humans.

In the first episode, singer Kim Kwang Seok appeared in AI format for the first time in 25 years. The late Kim Kwang Seok who died in 1996 sang Kim Bum Soo's I Miss You complete with his original voice.

Previously in December 2020, the Mnet television channel made a special One More Time program using AI. They presented several famous South Korean singers who had died, such as Turtle Man who sang the song Start Over from Gaho, which is the soundtrack of the Korean drama Itaewon Class. In this event, singer Kim Hyun Sik was also present to commemorate his 30 years of departure.

The presence of AI in South Korea is not new. Some time ago, the agency SM Entertainment had made a School of Oz musical concert using this technology. However, in recent times many singers who have died have appeared again in the AI version. This is the problem.

Cited from CNN International, Nam Sang Moon as SBS producer thought of this idea after he watched Go's match between Lee Se-dol and an AI program called HanDol in 2019.

At that time, Lee won one of three matches against HanDol but then he chose to retire from this competition because he thought AI was a form that could not be defeated.

Meanwhile, for musicians' performances, they try to keep up with technological developments and shorten the time. This was stated by Choi Hee Doo, the co-founder of Supertone who handled BTS performances with Shin Hae Chul.

Supertone is a South Korean company that was founded in 2020. This company focuses on using AI as content creators.

“For example, BTS is busy at the moment and it would be difficult if they couldn't participate due to timing issues. So if BTS uses our technology when making games or audio books or filling in animated voices, for example, they don't have to come record in person, ”said Choi Hee Doo.

The way Supertone works in utilizing AI is, the system will try 100 songs from 20 singers before being given Kim Kwang Seok's songs to learn. In addition, there is Ock Joo Hyun - the leader of the Fin.KL girl group - who will be the AI machine test experiment.

Full of Cons in the Community

Singer Kim Kwang Seok passed away at the age of 31 in 1996. He was at the peak of popularity through songs such as A Letter From a Private and Song of My Life.

In the midst of this popularity, Kim Kwang Seok's body was found lifeless at his home. The police said Kim Kwang Seok was depressed and chose to end his life. This statement is made based on the testimony of the wife.

But until a decade later, fans suspected Kim Kwang Seok's death was caused by the idol's murder. Until now, fans still gather on a street near his childhood home in Daegu City.

Meanwhile, other parties consider technology to pose a threat that needs to be managed under regulation. They also questioned the legality of using Kim Kwang Seok's voice. Is it copyright protected?

SBS party replied that they got permission from Kim Kwang Seok's family to reproduce the singer's voice. SBS paid the fee and part of his performance was released to the public via YouTube.

However, SBS and Supertone agreed not to release any songs from the show in digital format.

The AI ability that can mimic someone's movements and voices deserves thumbs up. But this regulation regarding the use of AI could create a new clone of identity.

376,000 people signed a petition calling for the government to take tough action against deepfake video makers who used to use female celebrities for pornographic content or trick someone into sending money.

Deeptrace, researchers from Amsterdam found 14 thousand deepfake videos spread in 2019, of which 96 percent came from South Korea with deepfake photos of female celebrities.

The government also answered the complaint. In December 2020, the Ministry of Science and Information, Communication Technology released the National AI Ethical Guideline. These are the rules regarding the use of AI as a tool for human life and according to a code of ethics.

Regarding AI ownership has not been clearly determined. Therefore, the South Korean government was asked to start managing AI copyright in order to ensure that its regulations guarantee human safety. WeTV Prepares A New Series Of Condolences, A Satirical Comedy Full Of Satire 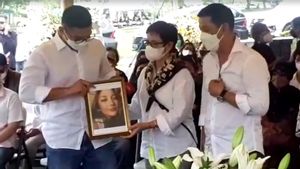 Sad To Be Left By Maura Magnalia, Nurul Arifin And Mayong Take Other People's Daughters Hostage Like In Indonesia, Japanese Cinemas Will Grow Their Income Again At The End Of 2021 Getting To Know Maura Magnalia's Mother, Nurul Arifin: Politician Who Was Once A Warkop DKI Girl Now With The Status Of An ASN, The Pension Guarantee For KPK Employees Is Borne By PT Taspen Taekwondo Trainer In Malang Reported For Allegations Of Abusing His Students Remember Nazaruddin Razali, The Acehnese Fisherman Who Asked For A Lethal Injection? The Judge's Application Was Rejected VIDEO: Urging Arteria Dahlan To Be Sacked, The Sunda Alliance Mass Holds A Demonstration In The DPR