SOLO - Alumni Akabri class 1989 in service for 33 years TNI-Police held a social service (Baksos) in the form of distribution of food packages and mass circumcision which was held at the Surakarta City Hall, Central Java Province, Thursday, October 21 today.

There was an interesting moment after Pangdam Rudianto gave a speech. When he got off the stage, Gibran suddenly ran up to a young man who was taking part in the vaccination. Apparently, this young man came from Papua.

Gibran wanted to get to know the young man better by taking him to lunch together. "I just asked for his cellphone number, later we will have lunch together", said Gibran briefly, Thursday, October 21.

It is not clear yet for what purpose, the eldest son of President Joko Widodo invited the young man to lunch. After talking briefly with the young man, Gibran then returned to the stage of the event accompanied by the Military Commander.

This mass circumcision was attended by 25 children. The event continued with the distribution of 2,000 food packages to people affected by the COVID-19 pandemic in Solo.

Pangdam IV/Diponegoro said that the 1989 Akabri alumni carried out a series of vaccination activities, mass circumcision, and distribution of food packages in Surakarta City in the context of the 76th Anniversary of the TNI. During the distribution of 2,000 food packages through Babinsa and Bhabinkamtibmas (Community Security and Order Supervisor) members to the homes of each recipient.

However, the Commander of the Regional Military Command said, the social service activities had started a year and a half ago or since the pandemic started, alumni of the Akabri class 89 gathered and carried out these social activities. Initially, they only carried out the distribution of masks to the community, distribution of food packages, opening up unused land for agriculture, plantations, fisheries, and so on.

"In today's social service activity, in the context of the 76th Anniversary of the TNI, with the same activity, we made a small contribution to the entire community", explained the Commander of the Military Command as quoted by Antara.

"Especially in the Central Java region combined with TMMD, such as Magelang and Grobogan regencies, and this Thursday in Solo, then Yogyakarta and will continue", said the Pangdam.

"We ask for the blessing of the community so that this social service activity can continue and help a few people in need during this COVID-19 pandemic", he said.

Meanwhile, Central Java Police Chief Inspector General Ahmad Luthfi expressed his infinite gratitude, this activity is an embodiment of the sense of togetherness in the spirit of the TNI corps, both the Army, Sea, Air, and Police together to overcome the COVID-19 case.

This, said the Police Chief, needs to be followed by all levels of society that conflict management cannot be handled alone and must be done together. 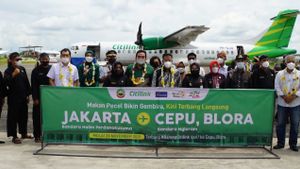 Europe Has Started Detecting The Arrival Of The Omicron Virus, Which Countries?