JAKARTA - Coordinating Minister for Maritime Affairs and Investment, Luhut Binsar Pandjaitan, not only reported that Hariz Azhar and Fatia Maulidianti were criminally involved. Both will also be prosecuted civilly.

"What is very interesting is that Pak Luhut said that this matter will also be a civil lawsuit," said Luhut's lawyer, Juniver Girsang, to reporters, Wednesday, September 22.

In the lawsuit, Hariz Azhar and Fatia Maulidianti who are considered to have defamed Luhut must pay Rp. 100 billion in money. The money is a form of accountability.

"In the civil lawsuit he told me earlier, we will sue both Haris Azhar and Fatia who have defameed him for Rp. 100 billion," he said.

If the lawsuit is granted, the money will not be enjoyed by Luhut. Instead, it is given to the Papuan people.

"If it is granted by the judge, it will be donated to the Papuan people. That is why he was so enthusiastic that he proved that what was alleged was not true and constituted defamation," said Juniver.

Previously, Luhut reported Hariz Azhar and Fatia Maulidianti to the Polda Metro Jaya. The report relates to allegations of defamation.

In addition, Luhut's reason for reporting was because there was no good faith from Haris Azhar and Fatia. In fact, they have been summoned twice. 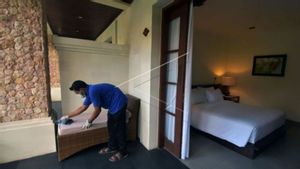 Bali Is Still Empty Of Foreign Tourists, Even Though International Flights Have Been Opened, The Quarantine Period Is Considered To Be The Cause