JAKARTA - The Criminal Investigation Unit of the National Police revealed that Inspector General Napoleon Bonaparte replaced the lock on Muhammad Kece's prison cell with another detainee. This was done to get into the detention cell of M Kece, the suspect in the blasphemy case.

"The standard lock for the victim's cell room has been replaced," said the Director of General Crimes at the Criminal Investigation Department, Brigadier General Andi Rian Djajadi, when contacted on Monday, September 20.

The lock of Muhammad Kece's prison cell was replaced with a cell from the 'Chairman of the RT' at the Bareskrim remand center. In that way, Napoleon Bonaparte could enter easily.

"It was replaced with a lock belonging to the RT chairman at the request of NB, so they can access it," said Andi.

But not explained in detail how the process of exchanging the padlock. Especially in the context of 'Head of RT' in the prison.

Allegedly, the 'RT head' in question is a prisoner in charge of other detainees.

"The head of the RT of the prisoner also has the initials H alias C," Andi said briefly.

Previously, Inspector General Napoleon Bonaparte was suspected of using his rank to overcome the supervision of prison officers during an act of persecution against Muhammad Kece. To prove this allegation, the Criminal Investigation Unit of the Police also examined four guard officers.

"On the other hand, the person in question (Napoleon Bonaparte) is also still the boss, with a subordinate guarding the detainees. We'll ask him there later," said Head of the Public Relations Division of the National Police Inspector General Argo Yuwono.

In addition, the examination of the officers was also to explore several other things. For example, the beginning of the persecution until the action of Napoleon smearing Muhammad Kece with human waste.

"Later there we will find out what happened," said Argo.

"What is the chronology like, what are we waiting for," he continued.

Meanwhile, Muhammad Kece reported that he had been a victim of persecution. The report is registered with the number LP: 0510/VIII/2021/Bareskrim, dated August 26, 2021.

After being investigated, it turned out that the perpetrator of the alleged abuse case was Inspector General Napoleon Bonaparte. Not only beating, Napoleon was also known to smear human feces on M. Kece's face.

Currently, the case is in the investigation stage. Several witnesses, ranging from officers from the detention center and inmates, have been questioned. 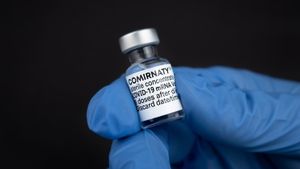 For Central Java Residents, Rainfall Can Increase 40 Percent In December Make You Fall In Love Over And Over Again, Recognize 7 Characteristics Of Alpha Men