JAKARTA - In the 1945 Constitution, Article 1 paragraph 3 states that "Indonesia is a state based on law." The existence of this article makes the people in it obliged to comply with all applicable laws in Indonesia.

In simple terms, law is defined as a rule in the form of sanctions and norms that apply and are made to regulate the various rights and obligations of citizens so that they do not conflict.

The purpose of enacting the law is to limit people's behavior and also create justice in society.

In Indonesia itself, there are various types of laws that the public needs to know. One of them is public law. Well, in this article, we will explain everything about public law, starting from its definition, types, to examples of cases.

Public law is a law that concerns the relationship between the state and individuals or regulates the public interest. Therefore, public law can also be referred to as State Law.

The characteristics of public law include:

- The ruler of the country has a higher position than individuals.

- Public law is enforced for the common goals and interests of the wider community.

- There are many relationships between countries, communities, individuals, and political forces in it.

Constitutional law regulates the relationship between various institutions in a country, namely the executive, legislative and judiciary. Written legal norms and principles in state practice are also included in this branch of law.

Everything related to the procedures and the relationship between one state's tools and equipment and another is called constitutional law.

When the Dutch came to power in the Dutch East Indies, the KUHP book was called the Wetboek van Starfrect (WvS).

1. The case of Jerinx's hate speech against IDI

Musician I Gede Ary Astina or Jerinx was convicted in the case of hate speech against the Indonesian Doctors Association (IDI).

The Public Prosecutor from the Bali High Prosecutor's Office demanded that Jerinx be sentenced to three years in prison, a fine of Rp. 10 million and a subside of three months in prison.

A dangdut singer Zaskia Gotik once had a deal with the police because she was caught violating traffic. This incident occurred in July 2017. at that time, Zaskia used a roadside that could only be used in an emergency.

3. Juliari Batubara stumbled upon the corruption of social assistance funds for COVID-19

In December 2020, the public was shocked by the news that Social Minister Juliari Batubara was arrested by the Corruption Eradication Commission (KPK).

Juliari, who has now resigned from his post as Minister of Social Affairs, was secured by the KPK for allegedly corrupting the COVID-19 social assistance fund (bansos). 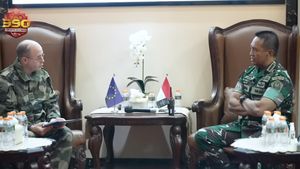 17,154 Items Of Unlicensed Strong Drugs Seized By Officers From 17 Regions In Tangerang Regency Wife Of Inspector General Ferdy Sambo Putri Candrawathi Becomes Suspect Of Brigadier J's Murder, Should Have Been Investigated Yesterday But Got Sick Letter Deputy Governor Of DKI Says Formula E Circuit Will Be Used Again For Events, But Not Motorcycle Racing