Head of Public Relations Division of the National Police, Inspector General Prabowo Argo Yuwono, explained that the award was given to a security guard named Nasruddin, because of his assertiveness with health protocol violators (prokes).

"The awards given are in the form of a charter and coaching fee. The National Police appreciates the security guard's performance because of his assertiveness to health protocol violators," said Argo in a written statement, Friday, February 26.

The video recorded by security guard Nasruddin went viral on social media because it prohibited a number of NGO elements who were not wearing masks from entering the Makassar Central BRI Office. The NGO officers got angry and scolded Nasruddin.

Nasruddin remains firm in asking NGOs to discipline health protocols. After the 2-minute 34-second video circulated on social media, the NGOs apologized for their mistake for not complying with the prokes.

The apology was made after the mediation process carried out by the Wajo Police, Makassar Port Police.

For the problems that were resolved by deliberation, the National Police Headquarters Baharkam, Inspector General Suwondo Nainggolan appreciated it.

"Kakorbinmas appreciates this, because this matter can be discussed and mediated by the police chief. And to the NGOs, they thank them for being loyal and apologizing. The point is we must prioritize familial mediation to solve the problem," he said. 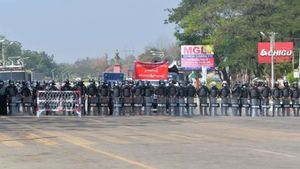 Lewandowski Is Not In Bayern's Squad Against PSG