JAKARTA - The pressure to hold the Extraordinary Democratic Party Congress (KLB) voiced by the management is considered unstoppable. Even the KLB is claimed to be held soon.

Political observer and Fixpoll founder, Wibisono, thinks that the Democrat Party under the leadership of Agus Harimurti Yudhoyono (AHY) will shake things up. This is because the anticlimax of the cadres who were not satisfied from the start, objected to the process of getting AHY to become chairman of the Democratic Party.

"I think that the encouragement of the Democrat Cadres for the more intense KLB will change the direction of politics in the future if AHY is not re-elected to be a General Chairman, the beginning of the party drama is when SBY is appointed to General Chairman, and SBY appoints AHY, so that a number of Democratic Cadres and Seniors refuse," Wibisono said to the media crew in Jakarta, reported by era.id, Wednesday, February 24.

According to Wibisono, the KLB movement was based on several reasons. Among other things, there were allegations that AHY was rigidly chosen at the Bali Congress. In addition, AHY is said to have failed to boost party electability in the 2019 elections and even tends to decrease by 3 digits. AHY is also considered to have minimal experience in political organizations and failed to compete in politics in the DKI Governor Election.

In addition, Wibisono also said that there is a perception of AHY as a product of the democratic oligarchy in the Democratic Party, and AHY's exclusivity in the midst of political simplicity.

"The Democrat Party KLB is an arena to test AHY's legitimacy to become a General Chairman again, because, in addition to the new General Chairman, AHY will certainly come back to be elected as a General Chairman, this is interesting for the political education process in democracy in Indonesia so that this party is not labeled as a Dynasty party or family," concluded Wibisono. Hitler's Painful Childhood And The Root Of His Cruelty Australia, The 'Escape' Country For Hollywood Artists In The Middle Of A Pandemic Siege 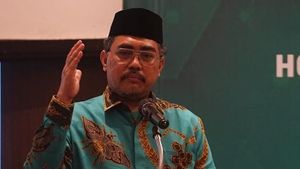 Know The Dangers Of Eating Fried For Health