JAKARTA - Mount Merapi erupted at around 13.45 WIB, Wednesday, January 27. One of the residents of Kaliurang, Yogyakarta, Fandy said that residents around the slopes of Mount Merapi did not seem to panic about this condition.

From where he was standing, black clouds were rising but no lava was visible. He said, this condition is different than what happened when Merapi erupted in 2010.

"There is no panic. But this is a different atmosphere from 2010. There is currently no ash rain," he said when contacted by VOI from Jakarta, Wednesday, January 27.

Meanwhile, another Kaliurang resident, Adi Nugroho, who was contacted by VOI from Jakarta, said that residents who were in a radius of 8 kilometers were evacuated. He got the information from a handytalky in his village.

"Residents around 8 kilometers have been evacuated, basically those above have been isolated. In the Kaliurang area, Cangkringan," said Kaliurang resident Adi Nugroho, contacted by VOI from Jakarta.

Then, he continued, the current condition of the sky was bright enough. Thus, the smoke from the eruption seemed to be carried by the wind towards Klaten and Boyolali. Meanwhile, the avalanches led to Kaliurang.

Previously reported, Mount Merapi, on the border of Central Java and Yogyakarta Special Region, emitted hot clouds of avalanches 14 times. This hot cloud has a maximum sliding distance of 1,500 meters to the southwest or the upper reaches of Kali Krasak and Boyong.

"As a result of this hot cloud, it was reported that light ash rain had occurred in several villages in Tamansari District, Boyolali Regency, and Boyolali City," said Head of the Geological Disaster Research and Technology Development Center (BPPTKG), Hanik Humaida.

He asked the public to anticipate the disturbance caused by the volcanic ash.

Based on the observation period starting at 06.00-10.00 WIB, the first hot avalanche cloud came out at 06.03 WIB which was recorded on the seismogram with an amplitude of 40 mm and a duration of 83 seconds. The sliding distance is estimated to be 800 meters to the southwest with the column height being washed by the wind to the eastward slope.

The second hot cloud glided at 06.08 WIB recorded on the seismogram with an amplitude of 43 mm and a duration of 111 seconds. Hot clouds rolled into Kali Karasak and Boyong with a sliding distance of 1,000 meters and the column height was swept by the wind to the east slope.

Furthermore, hot clouds of avalanches occurred at 06.21 WIB with an amplitude of 45 mm and a duration of 117 seconds and a glide distance of 1,000 meters to the southwest.

Meanwhile, the last hot cloud glide occurred at 09.42 WIB. This hot avalanche cloud was recorded with an amplitude of 15 mm and a duration of 90 seconds. Distance of 900 meters to the southwest.

The BPPTKG maintains the status of Mount Merapi at Level III or Alert with the current potential hazards in the form of lava avalanches and hot clouds in the south-southwest sector, including the Boyong, Bedog, Krasak, Bebeng, and Putih rivers for a maximum of five kilometers.

Meanwhile, in the event of an explosive eruption, the eruption of volcanic material can reach a radius of three km from the summit. 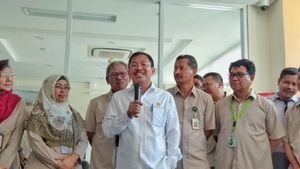 Pangeran Tunku Ismail From Johor Desires To Buy Valencia: Money Is Not My Motivation