PADANG - Candidate for the Governor of West Sumatra (West Sumatra) Mahyeldi believes the Constitutional Court (MK) will decide the suit against the results of the 2020 West Sumatra Governor Election. .

"I got information that the lawsuit will be heard on January 18, 2020 by the Constitutional Court, hopefully the Court will carry out its duties in accordance with applicable regulations," said Mahyeldi, in Padang, quoted by Antara, Wednesday, January 13

This belief emerged, because the defendant party was the General Election Commission (KPU). Mahyeldi hopes that the KPU can face the lawsuit material submitted by Nasrul Abit and Mulyadi at the Constitutional Court.

Two pairs of candidates for governor (cagub) of West Sumatra filed a dispute over the election results (PHP) for the elections to the Constitutional Court.

The lawsuit was filed by Nasrul Abit-Indra Catri by Gerindra and Mulyadi-Ali Mukhni by the Democrats and PAN.

Candidate pair number 1 Mulyadi-Ali Mukhni in their petition, was quoted on the website of the Constitutional Court requesting that the West Sumatra KPU decision regarding the recapitulation of vote count results for the governor and deputy governor elections of West Sumatra be canceled.

However, the petition did not mention in more detail regarding the loss of votes lost and the estimated votes that the pair should have received.

Meanwhile, candidate pair number 2 Nasrul Abit and Indra Catri in their petition said the determination of the recapitulation of vote count results for the election of governor and deputy governor of West Sumatra was legally flawed.

According to the candidate pair, the West Sumatra KPU committed serious violations by causing the loss of 28 voters' voting rights at Pariaman Regional Hospital.

In addition, the petitioner argued that at the stage of the recapitulation of vote count results at the provincial level, 290,533 votes were lost from South Solok Regency, Solok City, Pariaman City and Padang Pariaman Regency.

The legal team for the Mahyeldi-Audy Joinaldy pair, Miko Kamal believes that the Constitutional Court will act professionally in handling the dispute over the results of the West Sumatra Pilgub election.

"I am a legal person who believes in the Constitutional Court. It has been 25 years since I practiced defending in court. I testify, the professionalism and credibility of the institutions and people of the Court is unmatched. Far from other judicial institutions," he said. 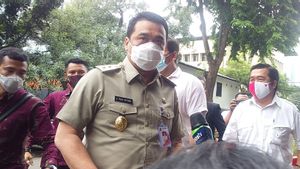 Vaccination Achievement Is Still Low, The House Of Representatives Asks For Vaccine Passport Idea To Be Re-examined Jokowi Revokes Presidential Regulation Miras, Mahfud MD: The Government Is Not Allergic To Criticism And Suggestions