Denny Indrayana Raises Donations To Sue South Kalimantan Regional Election In The Constitutional Court: This Is A Symbol Against Tyranny

"Ulun (I) would like to convey an explanation for the fundraising movement of 5 thousand Selamatkan Banua Kita, this is a voluntary raising. There is no coercion and this is not just a donation but rather an important political education, ”said Denny Indrayana in a video of his statement seen by VOI, Saturday, December 19.

The former Vice Minister of Law and Human Rights said politics does cost money. But the method of collection must be with the right model, trustworthy and responsible.

Denny said that this fundraising was deliberately not carried out during the campaign period for the South Kalimantan regional election. However, after the voting was completed followed by the recapitulation of votes through the KPU plenary session, Denny Indrayana felt that fundraising, aka donations, needed to be done.

"Now that we have worked hard, after we went to the field for more than a year, after getting a mandate of more than 800 thousand votes in polling stations. Apart from the concrete need for funding in Jakarta at the Constitutional Court, apart from political education it can build our togetherness, this can build movement militancy, "he said.

For Denny Indrayana, South Kalimantan must be fought for better. Therefore, this fundraising is a form of togetherness to realize what Denny Indrayana calls a struggle.

"How can we strive for better Banua in the future, the process must be more correct. That's why I don't use a personal account but an account with Difriadi and me, ”said Denny.

"So, fundraising or fundraising is not merely a means of raising money for struggle but a symbol that we are fighting injustice," said Denny Indrayana, who was formerly known as an activist of Pukat UGM. The 'Mystery' Of The Missing Of Vice President Ma'ruf When The Polemic Of The Perpres Miras Revealed, Claiming Not To Be Involved In The Discussion 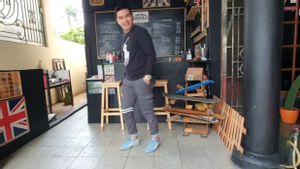 Kadin: Using Vaccines From China And The US, Private Companies Are Ready To Pay Their Employees 2 Times The Injection