JAMBI - A joint team of Intelmob and the Directorate of Drug and Drug Investigation of the Jambi Regional Police raided a drug village on Pandan Island, Legok Village, Telanaipura District, Jambi City, and arrested seven perpetrators and knocked down a hut for meth party.

"To raid this drug village, officers had to pass through thickets as high as two meters to get to the intended location. There have been many small huts built from tarpaulins and wood that are used for addicts to consume and party meth," said the Head of Public Relations of the Regional Police Jambi Kombes Mulia Prianto, as reported by ANTARA, Tuesday, October 5.

During the raid that took place on Monday (3/10), many perpetrators fled into the bush, so the officers had to chase them and finally managed to arrest seven perpetrators, one of whom was a dealer.

The raid on the drug village was initially carried out by members of the Jambi Police Mobile Brigade Intelligence Unit, who then coordinated with the Narcotics Directorate to hand over the perpetrators of drug abuse.

Before bringing the perpetrators, a joint team from the Jambi Regional Police also destroyed and burned 16 huts that were used as places for drug transactions and parties.

The perpetrators and the evidence were then taken to the Jambi Police's Narcotics Directorate for questioning and further examination. The raid on a drug village in Legok Village, Jambi City, took place. The Jambi Regional Police's Intelmob conducted an investigation based on reports from the public.

According to information, the drug village in Legok is a new place for drug addicts to obtain or consume methamphetamine drugs because there are also small wooden huts with tarpaulin roofs provided. The location is remote and quite difficult to reach the police.

Mulia said the police were still continuing to develop an investigation of the raid on the drug village to uncover a larger network. 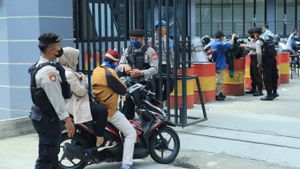 Egy And Witan Join The National Team TC, Sandy Walsh Even Back To His Club In Belgium