Arema FC Management Sorry, Promise To Give Compensation To Victims

JAKARTA - Arema FC management expresses its condolences for the victim's fall in the disaster that occurred in the 11th week of the 2022 Indonesian League 1 competition at the Kanjuruhan Stadium, Malang, Saturday, October 1. Not only that, but his party also formed a Crisis Center.

"Arema FC expresses deep condolences for the disaster in Kanjuruhan. Arema FC management is also responsible for handling victims, both those who have died and those who were injured," said Chairman of Panpel Arema FC, Abdul Haris quoting Antara, Sunday, October 2.

"The management will also establish a Crisis Center or information post that collects and receives reports for handling victims who are hospitalized," Haris added.

Arema FC's management also apologized profusely to the families of victims of the tragedy which is currently in the international spotlight.

"To the families of Arema Fc's management, they apologize profusely and are ready to provide compensation. Management is ready to accept input suggestions in handling post-disaster management so that many are rescued," concluded Abdul Haris.

The riots grew bigger where a number of flares were thrown including other objects. Joint security officers from the police and the TNI tried to dispel the supporters.

With the number of security officers not comparable to the number of thousands of Arema FC supporters, officers then fired tear gas in the field. The tear gas shot left many supporters fainting and difficulty breathing.

A total of 127 people were reported to have died in the tragedy that occurred at the Kanjuruhan Stadium, Malang Regency, East Java, after the match between Arema FC and Persebaya Surabaya. 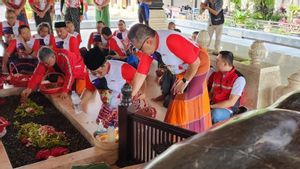