Again, Ukraine And Russia Accuse Each Other Of Shooting Actions Near Nuclear Power Plants

JAKARTA - Ukrainian and Russian officials reported shootings near the Zaporizhzhia Nuclear Power Plant in southern Ukraine on Monday, blaming each other after the International Atomic Energy Agency warned of disaster if fighting did not stop.

Russia and Ukraine have been accused of being linked to shootings near the plant in recent days, amid fears of a nuclear disaster at the plant near the Dnipro River.

Yevhen Yevtushenko, head of the administration of the Nikopol district, which lies across the river from Enerhodar, blamed Russian troops for shelling the city.

Meanwhile, Vladimir Rogov, a Russian official in the city said, over the past two hours there have been about 25 heavy artillery strikes of US-made M777 howitzers hit near nuclear plants and residential areas.

Russia's Interfax news agency, citing the press service of the Russian-appointed government by Enerhodar, said Ukrainian troops opened fire, with an explosion near the power plant.

"Russia thinks it can force the world to comply with their terms by firing at the Zaporizhzhia nuclear power plant," Andriy Yermak, Ukraine's presidential chief of staff, wrote on Twitter.

"This will not happen. Instead, our military will punish them with heavy blows with precision at the point where it hurts," said Yermak.

Separately, Natalia Humeniuk, spokeswoman for Ukraine's southern military command, said on Monday the situation was complicated but under control.

"The enemy did not dare to advance by land, but shelled the area behind with artillery and rockets," he told a news conference.

Previously, UN Secretary-General Antonio Guterres was known to have called for the establishment of a demilitarized zone around the Zaporizhzhia nuclear power plant.

Russian Foreign Ministry spokeswoman Maria Zakharova said her party would do everything it could to allow IAEA specialists to visit the nuclear power plant.

"In close cooperation with the agency and its leadership, we will do everything necessary to keep IAEA specialists at the station, providing an honest assessment of the destructive actions of the Ukrainian side," Zakharova said.

It is understood the Ukrainian military is planning a counter-offensive to retake Zaporizhzhia and the neighboring province of Kherson, the largest part of the territory that Russia seized after the February 24 invasion and is still holding out. 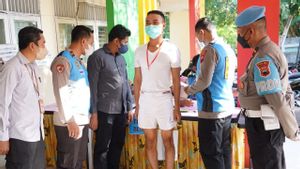