SRAGEN - The suspect in the murder of a biological mother in Sragen, Java, Central, turned out to have a motive of hurt. The perpetrator was upset because his mother often compared him to his nephew who was already successful in Jakarta. On that basis, the perpetrator with the initials DP (33) killed Setyorini (53), his own mother.

As previously reported, the Criminal Investigation Unit of Sragen Police arrested a man with the initials DP. The man had the heart to kill the woman who had given birth and raised him to this day. Setyorini was found dead in Widoro Village, Sragen Wetan Village, Sragen Regency, Central Java, in the bathroom with her head in a bucket.

DP, a resident of Widoro Sragen Wetan, who is still the victim's biological child, arranged the murder of his own mother so that it appeared that she had died because she fell in the bathroom of the house in June 28.

The Sragen Police Chief, Grand Commissioner Adjutant Piter Yanottama, explained that after DP underwent an examination, it was revealed that the perpetrator and the victim lived alone. Their economic condition is also quite difficult.

Piter said, the perpetrator is unemployed and does not have a permanent job. This is strongly suspected as a trigger for the perpetrator's emotional actions to finally end the life of his own biological mother.

From the results of the officer's investigation, the perpetrator explained that he had hit and banged his mother's head several times against the wall, which resulted in the victim suffering several injuries due to blunt force violence.

This was proven by the results of the autopsy, that there were several injuries caused by blunt force, which caused bleeding on the surface of the brain, and fractures of the skull base.

That's what makes the perpetrators have the heart to abuse his mother to death in the bathroom.

The police have named the perpetrator as a suspect in the murder case as referred to in Law No. 1 of 1946, Article 338 in conjunction with Article 351 of the Criminal Code. 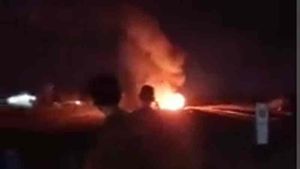 The Human Skeleton Found By Road Repair Workers In Sukabumi Turns Out To Be An Ojek Driver, A Robbery Victim