MEULABOH - Hundreds of fishermen in Samatiga Sub-district, West Aceh Regency have not been to sea for the past three days due to bad weather, in the form of strong winds and high waves in the waters of west and south of Aceh that reach four meters.

"We were forced not to go to sea because the weather conditions were very bad and safety was at risk," said Ikbal, a fisherman in Kuala Bubon, Samatiga District, West Aceh, as reported by ANTARA, Monday, July 4.

He said the impact of high sea waves also caused fishermen not to dare to move in the sea, because the wave height of up to four meters made it difficult for fishermen to find fish.

Because they can't do their activities, he said, this has an impact on the availability of fresh fish in the market.

Meanwhile, based on data from the Meteorology, Climatology and Geophysics Agency (BMK) at Cut Nyak Dhien Nagan Raya Airport Station, Aceh Province, the wave height in the western and southern waters of Aceh is estimated to reach 2.5 to four meters.

"Watch out for the potential for high waves," said BMKG Nagan Raya Station forecaster Rahmat Zikri in a written statement received in Meulaboh.

In addition to high waves, the public is also advised to be aware of the potential for heavy rain accompanied by strong winds in the west and south coasts of Aceh. Desperate To Kidnap A Man's Wife In Sampang, East Java, This Man Was Finally Arrested By The Police In South Kalimantan After 3 Months On The Run Marriage Rules For A Maximum Of 19 Years, Marriage Dispensation In Bogor Soars 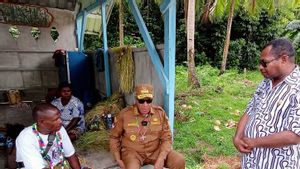 If The BLT Used To Be Entered Into The Account, Now The Raja Ampat Regency Government Distributes It Directly To The Ayau Archipelago Residents There Are Still ODGJ Imprisoned In Mukomuko, Health Office Guarantees The Treatment Process At The RSJ Is Now Not Difficult