JAKARTA - Secretary-General of the PDI-P DPP Hasto Kristiyanto said that political parties (political parties) must strengthen their party institutions so that they can play a role in realizing world peace and justice as the goal of the state.

The Doctor of Defense Science at the Defense University said that political parties must understand the purpose of the state and the essence of Pancasila as the Indonesian nation's view of life for the world so that every political party is aware that it must play a strategic role in the struggle to realize a new world order as pioneered by Bung Karno.

"In that context, strategic leadership with ideological content determines an active role in the struggle for justice and world peace," said Hasto, who is currently a doctoral candidate at the University of Indonesia's School of Strategic and Global Studies (SKSG), as quoted in a press release.

At that school, Hasto was guided by Prof. Satya Arinanto and DR. Hanief Saha Ghafur. The theme of the seminar was in line with the study he was researching.

"The results of the public cognition survey show that without leadership, ideology, culture, and institutionalization, political parties can be dragged into contestations that can obscure party identities and platforms. Political parties will not have time to think about strategic things including international politics," he explained.

Military and political observer Connie Rahakundini Bakrie explained how Indonesia's "founding fathers" had projected the goals of the state in the international arena.

According to her, the democracy campaigned by Sukarno and the founding fathers of the nation at that time did not necessarily "copypaste" Western-style democracy which tended to benefit the bourgeoisie and became a vehicle for the growth of capitalism.

She agreed that the current political parties in Indonesia need to revisit the thoughts and strategies of the nation's founding fathers, which are still actual and futuristic or beyond their time.

"A state movement is needed to revisit President Soekarno's futuristic thinking power towards To Build The World A New Edition II," said Connie.

Another speaker at the seminar was Prof. Satya Arinanto who explained the history of political parties in Indonesia.

"During the Reformation era, 'state governance' through empowering political parties became more democratic when compared to conditions during the New Order," said Satya.

KPU chairman for the 2016-2021 period, Arief Budiman, added that the role of political parties is important in institutionalizing democracy at every stage of holding presidential elections, legislative elections, and regional elections.

The strategic role of political parties, he said, needed in the regeneration process to fill political positions.

"Political education for the people is very important. In fact, politics is for the people, not for politicians. Making people smart to vote is the key," said Arief. 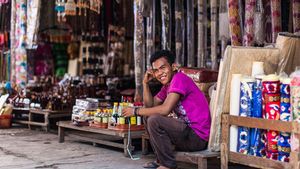 Didn't Expect To Beat Manchester United, Brentford Coach: I Think It Was A Deserved Victory Young Man In Kendal, Central Java, Died Covered In Blood Under The Gate, His Head And Back Were Full Of Stab Wounds