JAKARTA - Russian President Vladimir Putin refuted British Prime Minister Boris Johnson's insinuation that he would not have invaded Ukraine had it been a woman on Thursday.

Speaking at an early-morning news conference during a visit to Turkmenistan, President Putin pointed to British PM Margaret Thatcher's decision to send troops to the Falklands as a refutation of Johnson's theory.

"I just want to remember the historical event, when Margaret Thatcher decided to launch a military operation against Argentina for the Falkland Islands. So, a woman took the decision to launch military action," she said 'hitting back' PM Johnson, launches Reuters June 30.

"Therefore, this is not a completely accurate reference from the British Prime Minister to what happened today."

Furthermore, President Putin then criticized the British move 40 years ago, to respond militarily to Argentina's efforts to seize the small British-administered islands in the South Atlantic.

"Where are the Falkland Islands and where is Britain? Thatcher's actions were dictated by imperial ambition and (desire to) confirm their imperial status," President Putin said.

It is known, Moscow has repeatedly denounced Western military interventions such as the former Yugoslavia, Afghanistan and Iraq as examples of Western imperialism and hypocrisy.

However, during his two-decade rule, President Putin himself has faced accusations of imperialism, wanting to forcefully expand Russia's borders and influence throughout the former Soviet Union, and has himself said that he hopes he can reverse the collapse of the Soviet Union.

Russia's February 24 invasion of Ukraine has destroyed many cities, killed thousands of civilians and forced millions to flee their homes across Ukraine. VIDEO: Residents Come, Express Aspirations For Moeldoko To Advance In The 2024 Presidential Election VIDEO: Instant Noodle Subsidy In The Middle Of The 1998 Monetary Crisis Jokowi To Farel Prayoga Who Wants To Be A Professional Singer: Don't Forget To Study And Go To High School Army Chief Of Staff: We Must Unite To Face Internal Threats Anies: Governor Regulation 23/2022 To Avoid 'Smooth Evictions' Due To Taxes 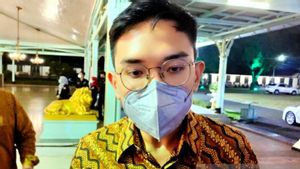 This Is What KGPAA Mangkunegara X Said, Who Was Appointed As Commissioner Of PT KAI TemanBumi, Detergent From Shells Made By Brawijaya University Students