The Head of the Cengkareng Police, Commissioner Ardhie Demastyo, admitted that his party was not sure what the motive for the perpetrator was to have sex with his own nephew.

"The perpetrator already has a wife. So we are still investigating what the motive is. Meanwhile, the perpetrator confessed that he was passionate about the victim," he told reporters, Tuesday, May 24.

"The perpetrator has been doing it for 3 years since the victim was 8 years old. (The perpetrator) did it almost every day, but the sexual intercourse was carried out more than 10 times," said Cengkareng Police Chief, Commissioner of Police Ardhie Demastyo to VOI, Tuesday, May 24.

In fact, for 3 years, the suspect admitted to fondling the victim's body almost every day after being cared for by the victim's parents.

"While others groped and molested (victims)," he said. Built On A Budget Of IDR 203 Billion, This Military Prison Equipped With Suicide Prevention And Artificial Intelligence Sensors 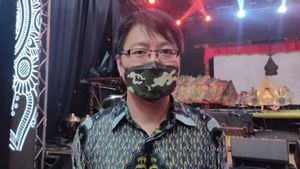