JAKARTA - Coordinating Minister for Human Development and Culture (Menko PMK) Muhadjir Effendy admitted his loss over the death of the Chairman of the BPJS Health Supervisory Board Achmad Yurianto. The former spokesperson for the COVID-19 Task Force passed away on Saturday evening, May 21.

"I really lost. The deceased was a hard worker. I did not know that he had a disease. Because of the signs. He was always cheerful. This means that there are no signs of anxiety or illness," he said in an official statement, quoted on Sunday, May 22.

Muhadjir also shared his memories with the late Achmad Yurianto. He said that he had known the deceased since he was still the spokesperson for the COVID-19 Task Force. Then the relationship continued until the deceased served as Chair of the BPJS Health Supervisory Board which is an agency under the coordination of the Coordinating Ministry for Human Development and Culture.

According to Muhadjir, Achmad Yurianto is a doctor who is smart, firm, and hardworking. He is also straightforward in conveying his views. Therefore, Muhadjir is not surprised that the deceased was chosen to be the Spokesperson for the COVID-19 Task Force.

"He has a pretty good academic background. Then of course, because the military is a firm person, when he expresses his views he is very agile because he is trusted as the spokesperson for COVID-19. I think he is a hard worker," he said.

Muhadjir also recounted his last meeting with the late Achmad Yurianto. He met at the launch of Presidential Instruction (Inpres) No. 1 of 2022 on Optimizing the National Health Insurance Program (JKN) which was held at the Office of the Coordinating Ministry for Human Development and Culture last February.

"At that time, about 2 months ago I was invited to the office. When I launched the Presidential Instruction on Health Social Security. I still had time to chat," he said. Through The Ambon City Secretary, KPK Finds Out The Mayor's Income Richard Louhenapessy 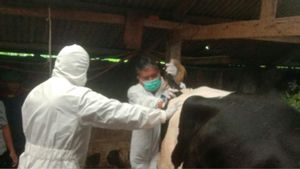 2,300 Livestock In Rembang Have Been Injected With PMK Vaccines Called To Use Controversial Tactics In Syria, West Admits General Surovikin Was The Mastermind Behind Russia's Successful Attack On Eastern Ukraine Concerning The Amount Of Salary For High-ranking Officials, The Chairperson Of The Pontianak DPRD Asks ACT's Budget Audit Apparatus Debuted At Tokyo Verdy And Played In Different Positions, Primary Arhan: I Enjoyed It