JAKARTA - Ustaz Abdul Somad (UAS) was refused entry to Singapore. However, the refusal turned out not to be due to immigration issues but because of the authority of the Lion Country which commonly happened.

The news of the refusal to enter Singapore was conveyed by Abdul Somad through his YouTube channel, Hai Guys, on Tuesday, May 17. He said he was refused entry by the Singapore Immigration Officer through Tanah Merah Port on Monday, May 16.

"I left for Singapore on Monday afternoon from Batam on May 16, 2022, and arrived at Tanah Merah Port (Singapore, ed) at around 1.30 (noon) Indonesian time. In order to have a holiday, my friend happened to be near his house from Singapore," said Abdul Somad on his YouTube show.

UAS admitted that at that time the files were complete. However, he suffered a different fate from his entourage because he could not enter the country.

"All the files are complete. Travel cards, cards to come in and out are complete, nothing is lacking. When the immigration stamp arrived, he didn't have a stamp because he just scanned the passport, it was a thumbprint," he said.

This lecturer admitted that he did not accept the treatment he received. Moreover, the Singapore immigration authorities did not give any reason for the refusal, whether it was because of terrorists, drugs, or involvement in the ISIS network.

"Starting at half 2, half 3, half 4, half 5 in the afternoon the last ship just returned home," he added.

Regarding this incident, the Directorate General of Immigration at the Ministry of Law and Human Rights (Kemenkumham) said that the refusal of Ustaz Abdul Somad or Abdul Somad Batubara to go to Singapore was not due to immigration problems. This decision is purely taken by the country.

"There are no problems with the seven of them in their passports. Indonesian immigration has complied with the regulations. The reason why the immigration authorities rejected them is the full authority of Singapore," said Sub-Coordinator of Public Relations of the Directorate General of Immigration Achmad Noer Saleh in a written statement, Tuesday, May 17.

Indonesia, continued Achmad, could not intervene in the refusal of entry issued by Singapore. Moreover, this kind of incident is common.

"In terms of Indonesian immigration, no problems were found in the immigration documents of the seven Indonesian citizens. The refusal to enter foreign nationals by the immigration authorities of a country is a common practice in maintaining the country's sovereignty," he explained.

Furthermore, Achmad explained, Ustaz Abdul Somad departed from Indonesia to Singapore with his family via TPI Batam Center by using the MV Brilliance of Majestic at around 12.50 western Indonesia time.

Upon arrival in Singapore, the ICA or the Singapore Immigration and Inspection Authority refused entry to the seven people. The reason is that they do not meet the requirements to visit the Lion Country.

"The seven people immediately returned to Indonesia at the first opportunity and arrived back at the Batam Center TPI at 18.10. The reasons and decisions for refusing the seven people were the full authority of the Singapore immigration authorities," he concluded. Noodle And Bread Enthusiasts Be Careful, Jokowi Says The Price Could Rise Due To Ukraine-Russia War 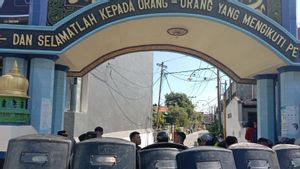 Booster Vaccine Certificate Appears In PeduliLindungi Even Though It Has Not Been Injected, Commission IX Of The House Of Representatives (DPR): Must Limit Until Completely!